Find out more
You are here: Home › Get Involved › Couchproject › About › Stories › Dealing With The Devil Of Addiction

Dealing with the devil of addiction 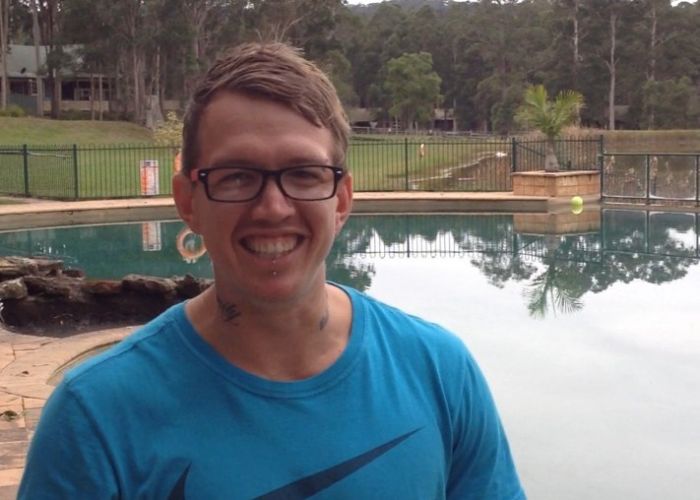 Today Jarrod beams with goodwill. He laughs easily and often. He has a fulltime job, a bunch of good friends and shares his story wherever possible to help others. Looking back, even he finds it hard to believe the ice-addicted, suicidal, homeless and angry person he was eight months ago.

“It’s like a movie of someone else’s life,” he says, shaking his head in disbelief.

Jarrod has a photo of himself on his first day in recovery. He is a tattooed, angry young man who most people would cross the street to avoid.

Addicted to ice, he was at times extremely violent. It once took eight police officers to subdue an ice-affected Jarrod who was smashing his own face with glass and smashing his head into the wall at his family home.

Jarrod is still not quite sure how much of the addiction – that started with smoking marijuana with friends at 15 – grew from the wrong decisions he made; how much was caused by the disease of addiction and how much resulted from an accident at age 12. This accident caused bleeding on his brain, put him in an induced coma, and made him feel “not all there" at school and with peers from then on. What he does know for sure, is that his recovery will be a lifelong battle.

Jarrod's family, out of necessity, took an Apprehended Violence Order (AVO) out against him and he found himself living on the streets. “I was eating out of a bin and often sleeping in toilets. Living on the streets is miserable – it’s cold and dangerous. It’s rock bottom. It's what (I imagine) hell looks like. I’d mostly wake up in a toilet and carry around a couple of jumpers and a couple of pairs of trackies in a backpack. It wasn’t pretty.”

42% of Australia’s homeless community are young people like Jarrod. Donate or fundraise to help the Salvos help them.

It took being completely cut off from his caring family and a suicide attempt that finally brought Jarrod completely undone. He says: “I felt broken, abandoned and worthless. I’d lost everything. There was a lot of guilt and major shame. I’d destroyed my family; (broken) my mum’s heart. I wrecked everything physically, emotionally and spiritually.”

A family member, who was part of the Salvos at Blacktown, rang Dooralong and the service contacted Jarrod. While he desperately wanted help, he also doubted he could be helped.

“It’s the most stunningly beautiful place. They make you face your inner child, family issues, self worth. They don’t judge and they just love you back to life. It is amazing!”

Despite having once been seriously anti-Christian – “The antichrist is tattooed on my face!” – Jarrod embraced the Christian faith that Dooralong is built on. “Life obviously wasn’t working with my will; I needed God’s will,” he says. “I have taken to the whole Christian thing; believing in God. I go to church and church is fun. God’s good. He’s got open arms and an open heart and loves me even though I’ve done bad things.”

Slowly building bridges to his family ‘means more than life itself’, Jarrod says. He is currently working and learning how to live a normal life in the real world. His heart, though, is for helping others. He is keen to study and work with animals in the future.

After experiencing the horror of homelessness he says: “I hate walking past people living on the streets now. I’ve gotten help. I want to give someone else the help to get up onto their two feet and stand tall again!”

Jarrod has a message for anyone who is struggling with addiction and homelessness and feels like there is no way out: “You’re not alone. The hardest part is to ring up and say I need help. The easy part is actually getting the help.

“I thought the next place I was going was into a box. Now I have a life, a home, a job. I talk to people about the struggle, because you can have peace, contentment. It’s pretty cool. There’s always that second chance.

“Months ago I was someone you didn’t want to talk to – you’d totally avoid. Now people say, ‘You’re an inspiration and that’s cool!’ People want to talk and listen.

“And,” Jarrod says, “I don’t want to fight people anymore. I just want to give hugs,” he says, with yet another big laugh and another beaming grin.

(Portions of this story are based on an interview with Rhema FM radio.)