You are here: Home › Christmas › Stories › The Full Circle Of Christmas Hope

The full circle of Christmas hope Rosemary is passionate about her work as a Salvos Christmas Coordinator supporting those in need, because she knows what it is like to struggle at Christmas time.

Rosemary Campbell has discovered there can be great joy in the midst of tough circumstances. The birth of God’s Son, Jesus, is the message of hope that helped transform Rosemary’s life and led her to help thousands of others at Christmas time.

Prior to Christmas 2019, Rosemary (who has served as Christmas co-ordinator at Nambour (QLD) Salvos for more than 22 years) knew there were more than 300 people in the community who needed family support over Christmas.

There were so many families who were struggling - some homeless, some children with a parent in prison, grandparent carers, families who facing unemployment, sickness, and more.

Rosemary says: “I thought ‘how on earth are we going to do this?’”

(The Sunshine Coast Daily newspaper annually encourages locals to “Adopt a Family”; Aussie World, opens its doors free every year to Salvation Army clients and others at Christmas; the local Ulysses motorcycle club toy run collects toys; and many other local individuals and businesses give generously.)

“It was like a miracle of endless provision. Christmas time is the time we celebrate the birth of Jesus and, honestly, it’s a time when the miracles really do happen,” Rosemary laughs.

Rosemary says one of the highlights last Christmas was being able to give a donated pushbike to a struggling family, who had been through desperately tough times.

“When I told mum we were able to give her son a bike, she just cried and cried and hugged me.  After Christmas she came back and said how much her son loved the bike and what a great day it had been.”

The Salvos are here for you and to help you this Christmas. Find out more about our social and community programs, Christmas lunches and financial support.
If you need help this Christmas

Rosemary is passionate about supporting those in need, because she knows what it is like to struggle. Her own marriage broke up more than 30 years ago and she was left to raise four children alone.

She had married at 17 and soon discovered her husband struggled with alcoholism.

Living with family and domestic violence, she says, “I was frightened. I know what it is like to wear long sleeves, so people don’t see the bruises.

“My husband would tell me that I’m good for nothing and you just get to the point where you believe that.”

Not knowing where to turn, Rosemary and her children felt trapped.

She says: “When the two oldest children were little, my husband would lock us out of the house and I would wait until dark, holding them close to keep them warm. When I knew he was asleep, I would get them inside, feed them and put them to bed.

“As the children started school, I would have to search the house for money to put petrol in the car to get them to school.”

After a harrowing family and domestic violence incident, she explains: “When I got (to the Salvos) the officer there spoke to me, then called in the welfare worker. They then found my children and myself a place to stay.

“They opened the family store to get clothes and organise food. They put me through a course to build up my self-esteem and work through my years of abuse. They continued to work with me for a number of years, helping with Christmas gifts and food, camps, and in many other ways.

“The Salvation Army not only saved my life, but the life of four children who were given the chance to have a really good, happy childhood,” Rosemary says.

Rosemary went on to volunteer and then to work in a number of roles with the Salvos. Helping others, through her local Salvos at Christmas time is her favourite role. 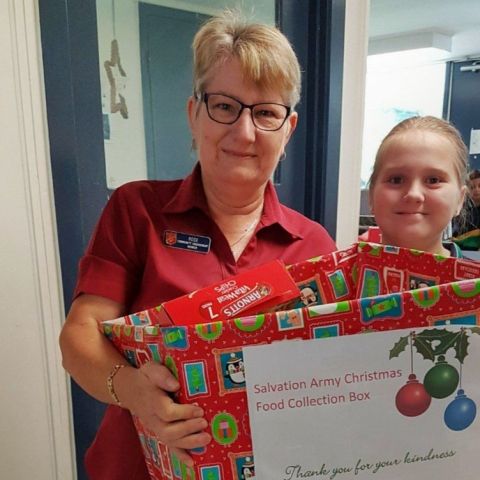 She says: “Ever since two of my grand-daughters (who are turning 13 and 16 this year) have been able to walk, they’ve been coming in and helping me at the Salvos every Christmas. My daughter always told them how our family used to get help, so they wanted to help and give back.”

Rosemary says she has not only discovered a passion for supporting others, but also discovered God’s deep love through her life experiences.

“God was with me, and what he’s done for me, what he’s given me, he wants me to share with others, so they can know the same sense of peace that I do.”

If you'd like to read more about the true meaning of Christmas, visit the page below.

Learn more about the meaning of Christmas