With devastating floods continuing to wreak havoc in south-east Queensland and northern NSW, Salvation Army Emergency Services (SAES) are on the ground assisting impacted communities. Intense rainfall compounded by severe thunderstorms has forced many locals to shelter indoors for days while others have had no choice but to evacuate as floodwaters threaten to inundate their homes.

Our prayers go out to the families of the eight people who have tragically lost their lives in this disaster, and we are here to offer practical, emotional and spiritual support to Queenslanders at this time and for the long haul.

Ten SAES teams are providing meals to emergency workers and impacted locals at eight evacuation centres. Over 6500 meals and refreshments have already been served at the evacuation centres by our teams who are also being supported by local Salvation Army corps. With floodwaters affecting access, many of these teams are working long shifts without reprieve as relief teams are cut off.

“In these places where we've got the evac sites, a lot of the volunteers were also flooded in, they couldn't get to the evac site to help out because they were stuck in their own homes. Whether they were literally flooded into their house or they are flooded in by roads, they couldn't get through. So we've really been stretched,” says Simon Gregory, Salvation Army Public Relations Secretary for Queensland. 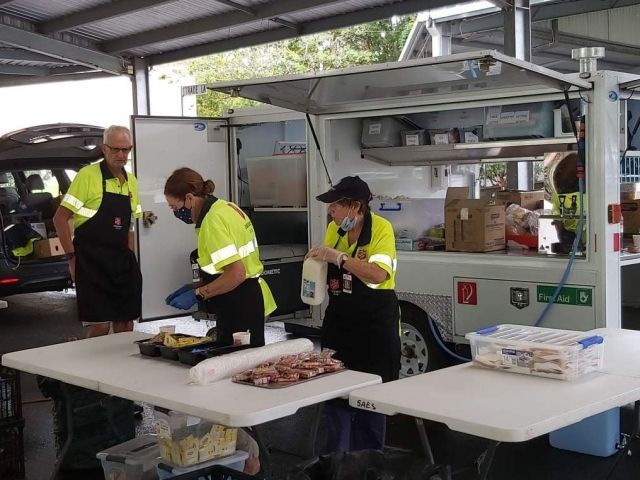 “All those locations are being covered by local teams at the moment. At Caboolture yesterday, it was literally the [corps] officers and a couple of volunteers, just basically working their guts out around the clock. They were hoping to be relieved by the team coming from the Gold Coast but were unable to [due to roads blocked].”

Thankfully, a team of seven volunteers is due to fly into Brisbane this evening from Newcastle to provide extra support in the coming days.

The Salvation Army has been providing support at evacuation centres in:

With the flood emergency expected to remain for the coming days as flood waters move through river catchments, in some places supermarkets around the evacuation sites have been donating food to the SAES so they can continue catering to emergency personnel and affected residents.

Adam Cole, QLD Salvation Army Emergency Response Coordinator says the Salvos has had great support from the Woolworths stores his team has tapped into so far.

“Woolworths stores that we've been dealing with have been absolutely fantastic assisting us in providing the provisions that we need to conduct the emergency catering. We always look at buying locally, supporting businesses when they are likely to be experiencing losses due to flood damage.

“The seamless support from Woolworths has made our emergency response that much more manageable. That's been great right across the board. We’ve also had good support from other businesses and other supermarkets in various locations as well.”

As floodwaters continue to put homes, businesses and lives under threat, the Salvos will be there doing whatever they can to support people who have been evacuated as well as anyone else who may need it.

Adam expects that by Wednesday or Thursday, The Salvation Army will be looking to transition into recovery work and identifying what needs to be done for the long haul.

“The weeks and months ahead will be long, and The Salvation Army will be doing what we can do to help support people who’ve lost their homes or their businesses,” he says. Along with our SAES teams and local corps, Salvos are continuing their community work, helping behind the scenes in other locations supporting efforts to reassure the community during this anxious time.

As always, our thoughts are with the impacted communities and emergency responders as they bravely risk their lives to keep others safe.

We will provide updates on how The Salvation Army can help those who have been affected in the coming days.

For emergency help in floods and storms, please call your local SES unit on 132 500, if the situation is life threatening call Triple Zero (000).

For financial support, please monitor the state government’s emergency recovery page for the most up-to-date information

Australian government support is available for those impacted by the floods.

If you wish to support recovery efforts for flood-affected communities, you can do so here.