The spiral of homelessness and heartache 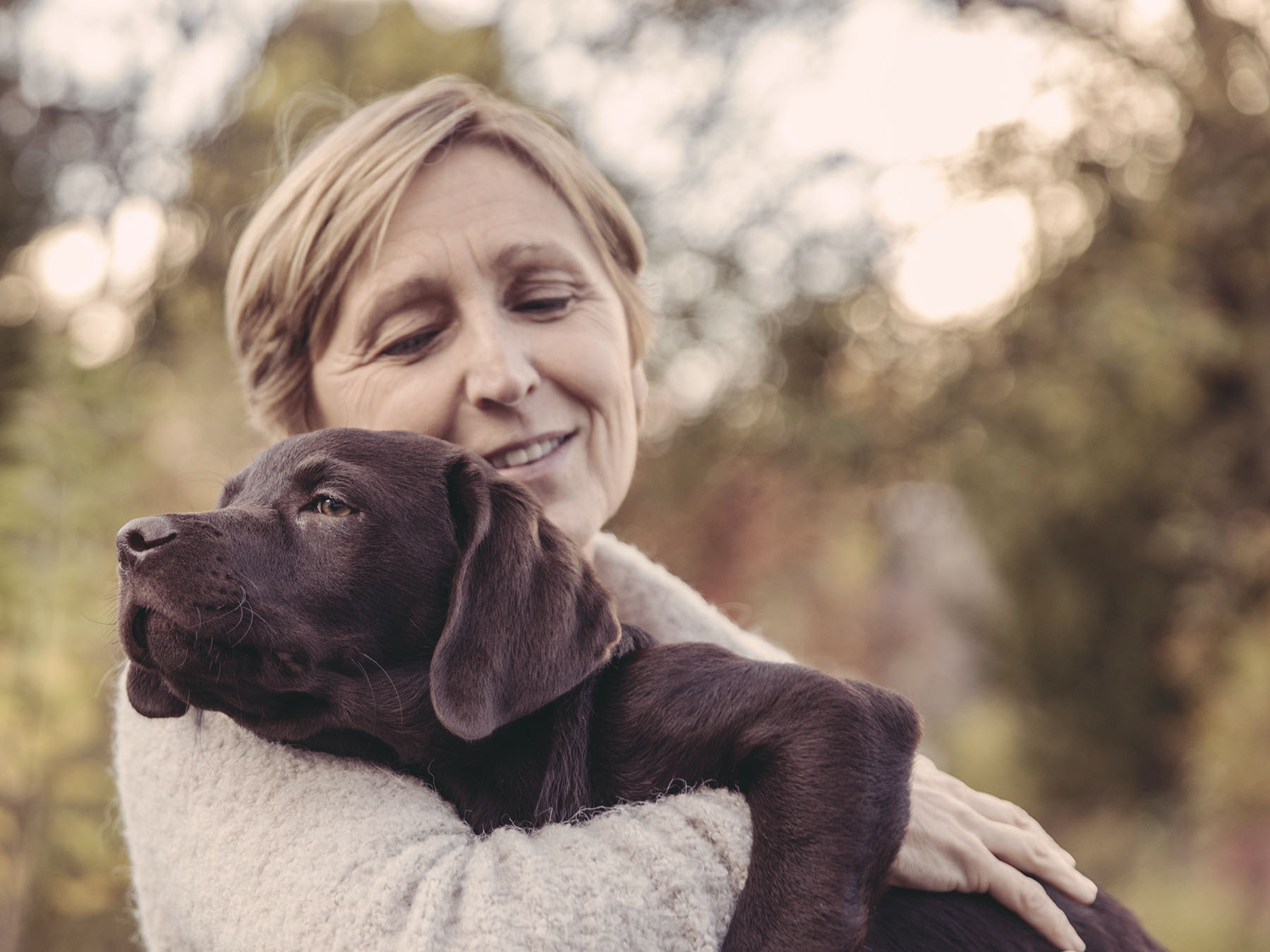 Forced to live in her car for over two years, the experience of homelessness seriously impacted Alison’s* physical and mental wellbeing. And while she is now in a private rental, Alison* says she is still dealing with the trauma of her experience and the ever-present fear of history repeating itself.

Some experiences were worse than others during the two years Alison and her dog Max, lived in their car.

Apart from the pain and struggle of managing multiple health issues in homelessness, it was the simple things that Alison found hardest – like trying to find somewhere to shower before a doctor’s appointment and feeling desperately self-conscious about personal hygiene.

Then there were the often-frightening nights, when she was unable to open the windows of the car due to security and safety concerns.

“The cops come and the shire come and shine floodlights on the car – just after you’ve gone to sleep or when you’re trying to – and you’ve got drunk people and sober people and kids walking past,” Alison says. “I’ve had people throw things at the car, bang on it, run around it, shake it so it starts to move … screaming at the top of their lungs.”

Until her late 30s, Alison was a working professional and paying off a home. The possibility of homelessness seemed a million miles away.

However, after her last job contract ended, she struggled to find another job and eventually couldn’t keep up with the mortgage payments.

Already struggling with physical health issues, and with her mental health beginning to suffer, Alison’s best option was to move interstate to share a rental property with a friend.

The two rented a cottage for several years in a popular holiday town, until Alison’s friend unexpectedly moved out with her new partner. As she also owed Alison a substantial amount of money, she also cut all ties with her. By this stage, Alison had chronic health issues that affected her ability to walk and she was applying (unsuccessfully) for disability support.

Alison explains that while it was a challenge, she managed to cover both her and her friend’s share of the rent for a short time. That was until the woman who owned the property wanted it vacated in order to use it as a holiday house.

While she managed to push out her stay for as long she could in order to find a new home, Alison simply could not compete in the highly competitive rental market. Surviving on a Centrelink income, and with a beloved pet in tow, real estate agents thought it unlikely she would be able to meet the weekly rent as well as basic living expenses.

“I had nowhere to go, so I just set up a bed in the back of the car, loaded up the boot and cleaned the house,” she says.

The first night, Alison drove around for hours, unsure of what to do. She eventually found a quiet street with a dead end to reduce the risk of people driving past. However, when she woke the next morning, the first thing she saw was a security camera pointed right at her car. This intrusion into her privacy at her most vulnerable was just the beginning. Alison became both highly visible and invisible, in equal measure.

At that point, staying in her car seemed a temporary situation. But days turned into weeks, weeks into months and months into years.

“[Finding] a shower is a nightmare – going to the doctor, going to the shopping centre, anything you need, you need to have a shower to feel a normal part of the community.” To ensure some level of privacy, Alison would often wash out of a public toilet sink at 4am in the freezing morning. She says she was so often worried about “stinking” that there were times she was too self-conscious to go out, making it even harder to attend appointments or apply for rental properties.

It was over a year before Alison was able to say, ‘yes, I’m homeless’ to someone. Uncertain of the rules, she feared admitting she was homeless would empower authorities to move her on. As it was, her experience with the local council, police and the public was all-too-often dehumanising and demoralising.

“The shire, the cops, everyone was always knocking on the window. People would reach through when I left the windows down a bit for air in summer and go ‘oh look, there’s someone in here, come and have a look!’ It’s like you’re looking in someone’s bedroom.”

Alison says the local shire would photograph her and threaten to fine her and even made accessing clean drinking water difficult when they shut off the water in the seasonal campgrounds – anything to make the homeless go away. But homelessness won’t go away simply by pushing those who are homeless into the shadows.

“I thought being homeless would be relatively cheap, but you’re going through endless amounts of fuel moving around and avoiding ‘looky-loos’, the cops and the shire,” says Alison. “Running the car to get rid of internal ice in winter, and just getting warm enough to try and sleep, or running air-conditioning in the summer.”

There was also the cost of doing laundry and keeping her phone charged to stay connected with services and look for housing. And every hot or fresh meal had to be bought, not made.

Alison reached out to a local Salvos homelessness support service, where she was provided with case management. But with high demand for transitional housing, her age and circumstances made her a lower priority than youth, families and people over the age of 55 – the public housing waiting list for a single adult female being as much as five to ten years.

When the COVID-19 pandemic took hold and restrictions were enforced, local police went around to move the homeless population into a single (free camping) area. Then, within a few weeks this measure was abandoned and they were instructed to leave altogether.

“They said, ‘no one’s allowed in any of the camping zones, everyone has to leave.’ And I said, ‘where are we supposed to go?’ If we had somewhere to go, we’d be there, it’s not by choice’.  We’re really high risk, we’re using toilet blocks without soap. We take our own soap and hand sanitiser, but you couldn’t find any more hand sanitiser.”

Eventually, the pandemic provided an opportunity for Alison to be supported into temporary motel accommodation as part of the state government’s COVID safety measures.

“We got her into a motel,” says Salvos caseworker Judy. “By this time, Alison’s legs were bad. I knew that it was really, really bad and Alison was doing everything she could, but there was just nothing [to rent] and I knew that her mental health was really precarious.”

Staying in motel accommodation at least made it possible for Alison to easily access a shower and toilet for the first time in over two years, but the likelihood of the motel stay ending was ever-present.

“The two weeks, it kept getting extended and I was there for three months in the end. But it was constantly like, ‘this isn’t permanent, you’re moving soon, you’ll be back in the car again’. It’s just this constant stress,” she says.

“I am thankful to the motel for letting us both in. A lot of people said I should just ‘surrender the dog’, but I can’t stress enough how fundamental Max has been in keeping me going. His loyalty, unconditional love, and caring for him got me through some of the hardest times of my life.”

“It’s the best one I’ve seen,” says Alison. “I don’t know how I got it. It has a community area, the neighbours are great ... but I [still] constantly have this thought that someone’s going to climb in through my window. That’s the echoes of homelessness.”

And while she is currently in private rental, the threat of the lease ending and the same issues emerging is also very real.

Judy says the preference is to have Alison in public housing, where she can live with some certainty and security. But with the availability of public housing being so scarce and the danger of Alison ‘slipping through the cracks’ when it comes to ‘meeting the criteria’, she continues to be at the mercy of an insecure private rental market.

Alison says the nightmare and trauma from her experiences are slow to fade but is thankful for the help she has received.

“I want to say a big thank you to all those who helped – the Salvos, landlords, real estate agents. I’m so grateful that they took the risk and gave Max and I a chance, given the situation we were in.”