Find out more
You are here: Home › About Us › News & Stories › Stories › Teddies Bring Unexpected Returns For Bev In Png When Bev Mann started collecting teddy bears for kids in Port Moresby’s slums, she never thought her mission would take her back to PNG – twice.

A team of 16 from Nambucca River Salvation Army Salvos travelled to Papua New Guinea on a mission trip in June. Spearheading the trip was 73-year-old Bev Mann from Nambucca, who had collected 531 CareFlight teddy bears to give to poor children in the slums.

The team spent 12 days at The Salvation Army's Training College in Port Moresby where they made use of their handyman skills to help repair the building.

“The whole team got in and did a lot of repairs! We replaced two flights of stairs and the landings, stripped down the wrought iron railing and re-painted it, cemented some of the floors, and built a new extension to the laundry. We replaced a lot of the playground equipment – and even built tables and chairs for the children in the preschool minding area!” says Bev.

The work was made difficult, as the tools, musical instruments and CareFlight bears the team tried to bring over were confiscated by customs.

“Despite this disappointment, our trip wasn't wasted at all, we did a lot at the training college and it was absolutely fantastic!” says Bev. “But I was absolutely devastated about not being able to hand out the bears.”

Two days after the team arrived home, the container was released. Bev was desperate to find a way to go back to Papua New Guinea. She wanted to see the teddy bears she’d worked so hard collecting in the hands of the poor children living with nothing in the slums.

“Captain Steve saw me crying my eyes out, and plans were quickly put into action for me to go back again. One of the women who had originally gone over, Jeannette, travelled back with me”.

Arriving in Papua New Guinea for the second time, Bev and Jeannette put 13 bags of CareFlight bears in a ute and were taken by Major Michael Dengi to Six Mile – a slum where The Salvation Army ministers weekly distributing food to the poor.

“There were only supposed to be 400 children but when we got there, there would have been at least 600 or 700 children!” says Bev.

“All the children were sitting on the dirt waiting for us and I explained that it was good for them to have a bear to cuddle at night when they get lonely or frightened. You should have seen the look on their faces when they saw those bears!”

For Queensland’s RACQ CareFlight Rescue to see the delight its bears have brought to children in need has been overwhelming.

“Bev’s journey and her determination to make a difference have been inspirational,” says RACQ Careflight Rescue Fundraising Manager Leanne Angel.

“We feel so very honoured to be part of the process with Bev and The Salvation Army.”

“Through our Charity of the Month people are helping CareFlight by buying our bears, but then spreading that joy by donating them to children in need in Australia and, in this instance, PNG.”

“The people I met over there they just astounded me with their generosity and with their love. They were just so friendly,” says Bev.

Here are some images from Bev's trip to Papua New Guinea: 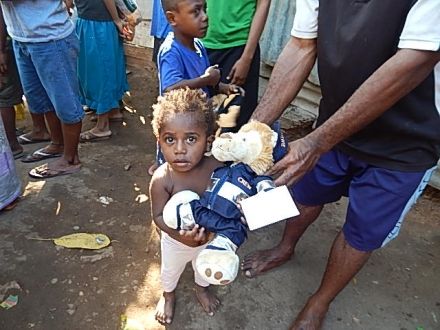 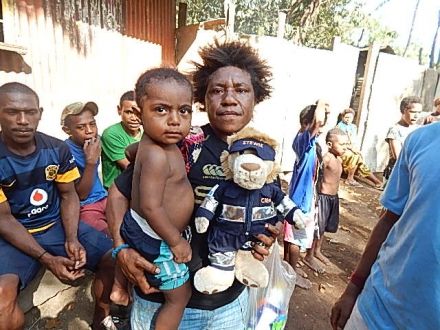