Find out more
You are here: Home › About Us › News & Stories › Stories › Standing Up For Women

Standing up for women 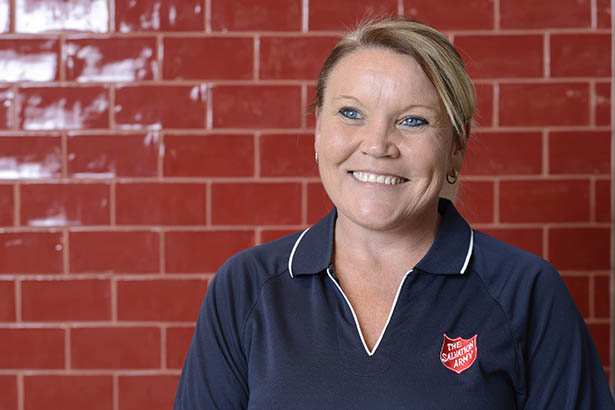 Gaynor Buffolin is the team leader of a Salvation Army refuge for women and children who are homeless due to domestic violence or other issues. In light of White Ribbon Day (25 November), Gaynor offers a confronting insight into the reality of domestic violence.

My job is high risk. We are the frontline workers. We are the early-intervention, crisis workers for women and children who are victims of domestic violence resulting in homelessness, which basically go hand-in- hand. We support women and children when they’re coming in from broken relationships. The perpetrator has kicked them out the night before coming to our service.

At any given time these women maybe suicidal; you have got to be able to recognise that. Or they might even want to harm their kids. They might just want to do a “runner”. You’ve got to be able to recognise the changes in their behaviour, the changes in their communication with you. Are they getting depressed? Are they anxious? They’re a bit heightened – have we got an issue with drugs? What might they be using to deal with their emotions or traumas?

You’re dealing with mental health issues, and you’re also dealing with past histories or even current histories of drug and alcohol abuse. The women live communally – not everybody gets on with each other. So when mums want to punch on, you’ve got to get in the middle of that. So there are risks inside and there are risks outside as well. We might be out supporting one of the clients at our units and the perpetrator’s there. He might target us.

We’ve got to be on our guard all the time. There’s a multitude of stories. The best days are when children have been removed by another service and we fight and we get them returned. Clients moving into their new home where they know that they’re safe. That’s a great experience.

A male child came in and he had to leave everything behind. He had this soaked teddy that he’d been sucking on the ear. He had to enrol in school and he didn’t want to go because he didn’t know anyone. It was all new and it was daunting for him. But he came home one day and said, “I got an award at school today!” That’s another great thing.

We had a lady in here who owned a number of houses. We went through property settlement with her and she got half of every single one of those houses. So she moved on to buy her own house and that was another smiley day for us.

We get women in here who don’t have any money because he (their ex) was the sole provider. They are like, “Family [Benefit] what? Who do I go to?” And we say, “Centrelink – for a parenting payment”. And they never knew that they were eligible for such a thing. Then all of a sudden they get a payment going into their bank account, and they come in and say, “I’ve got all this money in my account!” We say, “Yep, and it’s yours,” and they’re like, “Really? I’ve never had this much money!” Centrelink payments are not a great deal of money, unless you have never had your own money.

They talk about the “preparation” for leaving a domestic violence relationship. How can you prepare for something like that? You can build bank accounts, if you’ve got access to finances. You can pack your suitcase and put it where you can grab it on your way out the door or in your car. But the perpetrators, they’re not silly. They know when you’re making preparations to do something out of the ordinary because they’re watching your every move. They are so controlling. They know when you go to sleep and when you wake up. They know what you have for breakfast, because they are watching your every move.

If you are in a domestic violence situation I would urge you to seek help, get support. Talk to someone – even if it’s your children’s schoolteacher. Tell someone. Don’t live like that. There is hope.

There are people that are willing to help. It might be a complete stranger or a person who you would never think would assist. Try and get in contact with services like ours. Even if we can’t assist with accommodation we can guide you to where there is support and safety.

I love my job. I would love it if there were no victims, everybody living happily ever after, but unfortunately that’s only a dream. My strength comes from the fact that I want to make a difference in the lives of women who are experiencing domestic violence. If I can make a change in one person’s life then that is one less person having to endure this – maybe one less statistic.

My waiting list is about 30 women at any given time. The service is completely funded through donations; we’re reliant on the generosity of Australians who support The Salvation Army. The tragedy is that I’ve got only half the cottage open because of a lack of funds – I’ve got four rooms sitting here vacant.

The Salvation Army needs your help to open up rooms for victims of domestic violence.