Find out more
You are here: Home › About Us › News & Stories › Stories › Scenic Rim Farmers Thank God For The Salvos 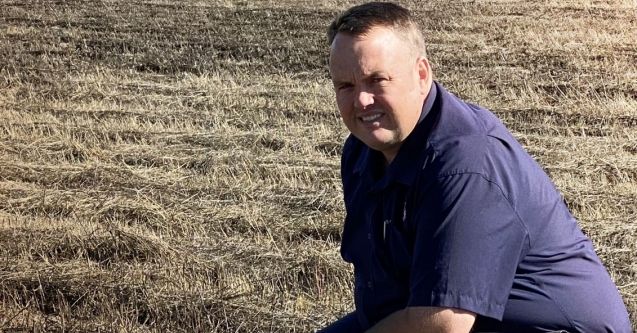 While Australia’s focus in recent times has been on recovery from the ‘Black Summer’ bushfires and the battle against COVID-19, what has been largely forgotten is the farmers still struggling with another crisis – the severe drought affecting many parts of the country.

The extended drought saw a decline in water storages in every state and territory across Australia. Although somewhat replenished in the last few months, many dams are still at below 50 per cent capacity.

As time goes on, the effects of this continuing drought are becoming more pronounced. Farmers and their families are taking on increased debt to deal with its devastating effects – cost of keeping stock alive, falling production and high input costs – which is presenting serious challenges in many regions, especially New South Wales and Queensland[1].

Equally damaging is the impact this ongoing drought has had on the mental health of farmers and their families. Depression and anxiety can be exacerbated due to the isolation of those living in rural areas. Unfortunately, people living in these communities face increased barriers to accessing health care than those living in major cities, making it harder to maintain good mental health.

The Salvation Army has not forgotten these people and is working hard to provide relief and assistance to farmers, their families, businesses and properties where the drought is still having a crippling impact.

Salvos help out in Scenic Rim

Captain Wes Bust is the officer of Fassifern Corps, located at the centre of the Scenic Rim in south-eastern Queensland. Wes says the area hadn’t seen rain since the 255mm that fell in January/February. “We’ve had 3mm since then.”

Denise Thomas, The Salvation Army’s program coordinator for the Federal Government Drought Community Support Initiative (DCSI), says if it wasn’t for Wes’ advocacy on behalf of the people in the Scenic Rim, they may not have received any funding to get back on their feet.

Wes is one of several Salvation Army workers processing applications for DCSI grants of up to $3000.

According to Denise, Scenic Rim missed out on the first wave of funding. “Wes consistently advocated for his community, stating they were in severe drought and in desperate need of drought assistance,” she said. “Due to Wes’ advocacy and highlighting the issues in his ‘patch’, the DCSI team was able to advocate successfully to the government to include Scenic Rim as an eligible LGA [Local Government Area].”

Since then (and at time of publication), $975,000 has been distributed across the region to almost 325 farmers. Government figures indicate that over $49.5 million in DCSI funds have been given out so far to more than 17,000 drought-affected households.

Denise says The Salvation Army has also handed out about $8 million from its own resources, mostly across New South Wales and Queensland.

“Wes is a credit to The Salvation Army and an amazing representative of what The Salvation Army is all about,” says Denise, adding that Wes had been allocated some online and telephone applications, but had generated more himself ‘from his knowledge of the community and his contact with key stakeholders’.

The eligible applicants could use the one-off DCSI payment to buy groceries or spend on vehicle maintenance, energy and utility bills or health and medical expenses.

Wes says that although the Scenic Rim community was not angry it had been overlooked with the initial round of funding, they were much happier when the money was finally available.

“The farmers out here are very resilient people but [the relief funding] has far-reaching impacts into our community. It helps not just the farmer, it also impacts the farm supply businesses or the grocery store or the pharmacy; they pay the council rates, or they go and buy those ‘big-ticket items’ like a new pump.

“The great thing about the DCSI is that the funding comes back into our local community. It’s a real shot in our arm in what has been very difficult times.”

As well as actively seeking out eligible households in the community and promoting DCSI to other professionals, Wes maintains contact with local MPs and posts videos on social media that promote DCSI and offers personal assistance to eligible community members.

Wes praised the work of the Federal Member for Wright, Scott Buchholtz, who had been “doing all he can” to ensure the struggling farm community in his electorate “are advocated for in the Federal Government space”.

Denise said many of the people contacted by the Salvos were “overwhelmed” at being offered support, as they were not aware they were eligible for funding. “Some have been in tears on hearing they were eligible,” she said. “One person said they had an eviction notice as they had not been able to pay their rates. Another had $30 in the bank and was going through a tough time personally and another said The Salvation Army seems to contact him just when he needs it most.”

Wes talked to a farmer who had the infrastructure in place for irrigation but could not afford a pump to power it. “I asked how much was the new pump and they said it was nearly $3000 and I said: ‘Well, if you’re eligible (for DCSI assistance), that’s what we're going to be able to give to you and they were quite moved by that.”

In addition to rural chaplains, Salvation Army court and prison chaplains who have been unable to go into the courts and prisons due to COVID-19, have been assisting with the completion of drought assessments.

Making connections in the time of COVID-19

Wes said that with the spread of the COVID-19 virus and measures around social distancing, it was “just nice” to be able to still connect with the community over the phone.

“It’s just another way to connect with our community and to let the community know that they're not doing it on their own; that we’re in their corner and we’re cheering them on,” he said. “What they’re also getting is a local who is prepared to take the time to listen. What I wanted to do was to provide a local touch so that it wasn't just money getting handed out, but it was the local Salvos connecting with our community.”

Is he still receiving applications for funding? “I have another 15 on my desk today and three farmers have rung while we’ve been speaking.”

“I’m hoping to get through as many as physically possible before the funding agreement runs out,” Wes said.

The Scenic Rim is considered the carrot capital of Australia. There is also grazing, dairy, mixed crops, honey production and organic growers – on significant properties as well as the boutique farms.

Wes said he was not “a country boy”, having grown up in Toowoomba (on the edge of the Scenic Rim) but he admitted he’d “learnt lots in three years”.

“Some of the farmers have said they have spent an extraordinary amount of money on power to irrigate per year. Others have spent money on feed that most people wouldn’t even earn in a year trying to keep cattle alive and the so it's just been a bit humbling to be able to hear their stories and to let them know that, at the end of the conversation, they’ve been heard they’ve been known and they’ve been noticed,” Wes said.

Call for donations as crisis continues

Financial assistance and support from The Salvation Army makes it possible for farming households to feed their family, educate their children, pay bills or tend to their land. It can help keep communities viable until conditions are more favourable.

The Salvation Army is aware that this crisis isn’t over yet and many individuals and communities affected by the ongoing drought need urgent and ongoing support. Additionally, as COVID-19 sees those already vulnerable experiencing worsening physical, mental and financial hardship than ever before, The Salvation Army is here to help.

If you would like to support the drought-affected communities around Australia, please make a tax-deductible donation or call 13 SALVOS (13 72 58), and help us leave no one in need.