You are here: Home › About Us › News & Stories › Stories › Salvos Provide Cyclone Support

Teams on the ground in Western Australia 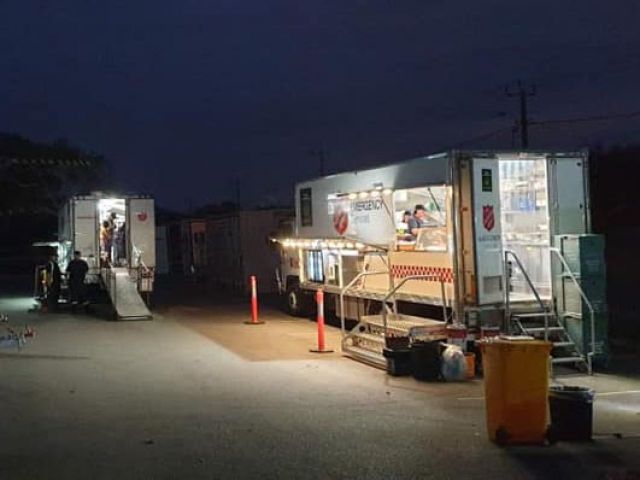 The Salvation Army is in action in cyclone-affected Western Australia, providing meals to first-responders and support to impacted communities.

When Tropical Cyclone Seroja hit the coast of Western Australia north of Dongara on Sunday evening, it left a path of destruction in its wake. Impacting the mainland further south than what is typically expected, the infrastructure of the affected towns was not built to withstand the ferocity of such an event and the result has in many cases been catastrophic.

The coastal town of Kalbarri has received damage to around 70 per cent of its buildings, with a significant number of homes having their entire roofs stripped off. Salvation Army Corps Officer Major Natalie Norman said Cyclone Seroja "was the worst wind I've ever experienced. It was gusting at 120km per hour ... and we were on the bottom edge of it, we didn't experience the wind anywhere near as bad as the other towns."

“We have just completed dinner for about 300 SES and other DFES personnel,” said Salvation Army Strategic Emergency and Disaster Management State Coordinator, Ben Day on Monday evening. “We are feeding breakfast, lunch and dinner and sending food out to various locations.”

In Geraldton itself, The Salvation Army has managed to re-open its Doorways program with Natalie and her team providing support to residentsdespite being without power. "It’s just nice to talk to people and say, ‘You’re not on your own, there are people to help you, we are here to listen and we are here to give you a shoulder to cry on’," says Natalie.

The Salvation Army’s Divisional Public Relations Secretary, Warren Palmer, says there are multiple needs being presented with Kalbarri, Northampton and Mullewa bearing the brunt of this cyclone with many houses unliveable and residents requiring alternate accommodation.

“Geraldton was largely spared however the main issue has been the loss of power. Power is still not restored with almost 35,000 people being impacted. Those without generators have needed to remove spoiled food from their refrigerators and freezers and there is no doubt, as a consequence, food supplies in and around the city will be a pressure point.”

The local Salvos team in Geraldton will be boosted with extra Salvos from Perth over the next 24 hours to ensure we can meet the needs of impacted communities.

“This will allow us to provide immediate cash assistance and other forms of support as well as working with the Department of Communities in providing support into other outlying areas outside of Geraldton,” says Warren.“Our presence will be re-located to the recovery centre being established now. This presence may grow depending on the demand for our services, but we are prepared for this. Despite not having power right now, we are working around this with other solutions.”

Despite the remoteness and the loss of power, our teams are working steadily to complete assessments, however the full scale of the impact will become more apparent in the days ahead. The Salvation Army will be standing by the communities affected for the long-haul and will work alongside other agencies to provide the support needed, both immediately and into the future.

If you, or someone you know has been impacted by Tropical Cyclone Seroja and need emergency assistance, contact the State Emergency Service (SES) on 132 500.

A version of this story first appeared in The Salvation Army’s online magazine Others.org.au.