You are here: Home › About Us › News & Stories › Stories › Salvation Army On Hand At The Firefront

Salvation Army on hand at the firefront 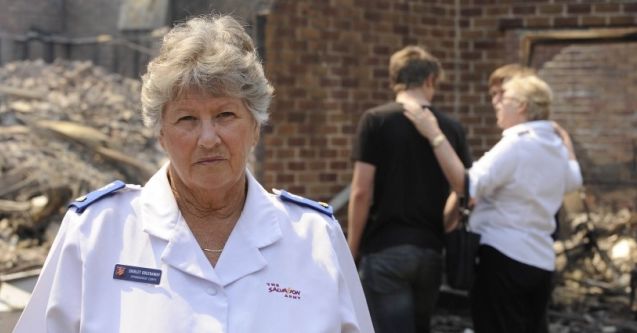 “Our officers and volunteers provided emergency assistance with meals, hot and cold beverages, as well as a listening ear to so many affected residents who were shocked and devastated after the fires went through.”

Salvation Army spokesperson Major Jeff Winterburn says, “People are hurting and we’re committed to being there to support them.”

In the aftermath, crews remained on burnt-out streets, serving breakfast, lunch and dinner to remaining residents without power and emergency services personnel who were assessing the devastation.

“We want to give support where it’s needed and at, the moment, being out on the front line providing food and emotional support, allowing us to ascertain the needs of the residents affected,” said Captain Phil Sharp, who serves at The Salvation Army in the Lower Blue Mountains township of Springwood.

The crews worked from a dedicated Salvation Army Emergency Services truck where meals could be prepared and served. It also had charging points where fire-affected residents could charge their phones and other devices necessary to keep them in contact with loved ones.