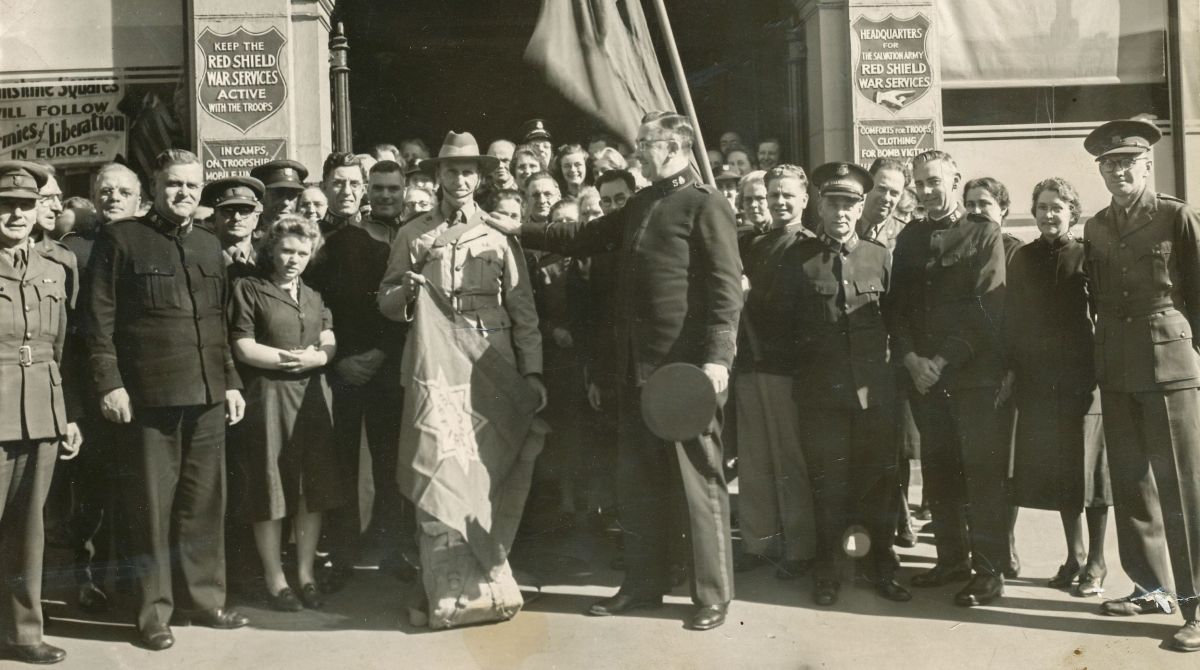 Major Harold Hosier on his return to Australia after World War Two.

From service through wartime to natural disasters and the impacts of the current pandemic, The Salvation Army has always been there, to provide practical and spiritual support to those on the frontline and for as long as they are needed.

For The Salvation Army’s Major Harold Hosier (1892-1987), time spent alongside troops as a World War Two prisoner of war (POW) led to immense empathy and long-term support for the incarcerated.

Major Hosier docked in Greece in March 1941, ready to support troops on the frontline of the war effort. A Red Shield Representative (welfare officer) attached to the 6th Division of the Australian Imperial Force (AIF), he served for less than a month before becoming a prisoner of war for nearly four years.

Just seven weeks after World War II was declared, Harold was accepted as a Red Shield Representative and was one of the first three Salvation Army officers to accompany the 2nd AIF overseas.

In February 1940, he arrived in Palestine with the 6th Division, who were ordered to Libya to confront the Italian army. Every motor vehicle of the division was accounted for, leaving no possibility of transport for Harold, who was desperate to accompany the men of the battalion he was responsible for. The only alternative was to purchase a station wagon from a Cairo used car dealer, which was then camouflaged by the military.

Harold’s service to the troops in Libya is documented by 2/1st Battalion historical accounts, which describe the moment when the AIF prepared to attack the coastal town of Bardia.

“At dusk, the Battalion commenced its long march to the assembly area ... Padre Hosier, from The Salvation Army, was dispensing cups of coffee and telling those who took it he would be praying for them.”

On 5 January 1941, Harold’s camouflaged mobile canteen entered Bardia in the dust clouds of the leading AIF units. He was handing out hot coffee to weary soldiers within seven minutes of the AIF’s entry into the captured Italian stronghold.

The nearby town of Tobruk was captured from the Italians on 22 January 1941. Harold entered the township before the firing had finished, driving around handing out very welcome drinks and cake, and providing a cheery word to the men of the 6th Division.

The Battle of Greece

From Tobruk, Harold and his mobile canteen, along with the 6th Division, were ferried to Greece where the British Expeditionary Force (BEF) was to halt the German invasion. This was to be the first time Australian and New Zealand troops (Anzacs) would fight together since Gallipoli (World War I).

By late March 1941, Harold had established a refreshment post outside Athens, where he provided coffee to Australian troops moving north. But when the German rapid offensive (known as blitzkrieg) thundered into Greece in April, retreating Allied forces were cut off.

Harold maintained his refreshment point at Athens and then used his mobile canteen as an ambulance until its destruction was ordered.

The last of the rescue flotilla left Greece on 28 April 1941. Harold was among the thousands of AIF soldiers left behind to become POWs of Germany. Red Shield Commissioner Ralph Satchell reported:

“Major Edgar of the 2/2nd Battalion offered Harold Hosier a seat on the last plane out of Greece. Hosier refused to leave the 30 soldiers he was with and was last seen down on his knees helping a wounded digger.” Harold Hosier was interned in a POW camp at Corinth, along with 7000 Allied POWs. He was later transported to Stalag VIII-B, a large prisoner of war camp at Lamsdorf in Silesia. From there he continued to serve the captured troops, providing a much-needed message of hope over the years of their internment. He wrote of this important ministry to his wife:

“When in a prisoners’ camp in Greece a Y.M.C.A. man and myself had some wonderful services, over 2000 men attending, we had a choir of 50 men, and special classes with spiritual results. In the prison camp here in Germany we have two services on Sunday, a Bible reading and discussion groups, and prayers every evening.”

The German commandant made Harold the prisoner’s chaplain and afforded him the military rank of captain (Hauptmann). In this role, Harold helped look after the spiritual and physical needs of his fellow prisoners until he was repatriated back to Australia in November 1944.

As a Red Shield Representative, Harold worked actively to keep hope alive for those denied their freedom and in their deepest moments of despair – from the captured troops in Europe to those in Australian prisons.

To read how The Salvation Army is involved in commemorating Anzac day this year, click here.