You are here: Home › About Us › News & Stories › Stories › Paralympian Alistair Donohoe Shares His Heart For Others This Easter

Paralympian Alistair Donohoe shares his heart for others this Easter At the age of 26, Paralympic cyclist Alistair Donohoe has already experienced some extreme highs and lows. He has broken para-cycling records, won a range of international championships and been awarded medals at the Rio and Kyoto Paralympics. He has also faced very real personal and professional challenges.

Alistair recently shared his story at The Salvation Army’s God’s Sports Arena (GSA) church, saying that his faith has kept him on the path of hope and motivates him to focus on supporting others.

On a rain-drenched road in Tokyo, Paralympian Alistair Donohoe was bloodied and in pain after a fall when a competitor in the 92km men’s road race pushed in front of him and slipped. Alistair heroically struggled back onto his bike, fell again, before unsuccessfully trying to rejoin the race leaders. He finished fifth.

Despite podium finishes in two other events – bronze in the 32km men’s C5 time trial and silver in the 400m men’s C5 individual pursuit – it was a bitter disappointment after years of intense training.

Sadly, it was not the first time.

During the 2016 Rio Paralympics, seconds away from a gold medal, Alistair was knocked off his bike almost at the finish line, by the same competitor.

Although he was injured and bleeding, Alistair struggled to his feet and crossed the line, but as he didn’t have his bike with him, he could not win on a technicality. By the time he had recovered his bike and re-crossed, he was out of medal contention.

He did win two silver medals in his other C5 events during those games (4000m individual pursuit and men’s time trial). 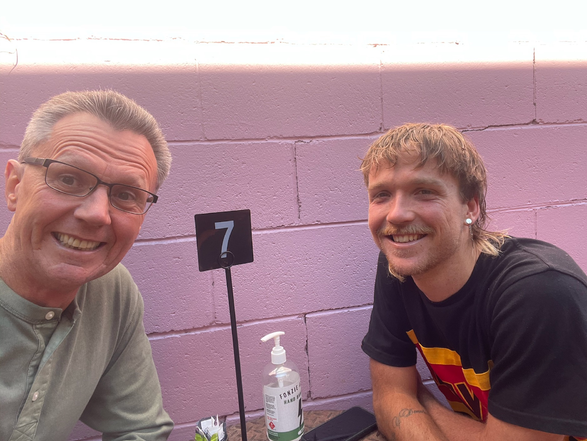 Alistair shares a story of highs and lows

Following the Kyoto Games, Alistair was invited to speak at The Salvation Army’s God’s Sports Arena (GSA) Church in Brisbane.

The unique inner-city Salvation Army church supports many, including those going through and exiting addiction recovery, and others rebuilding lives after prison, and was established by Salvation Army ‘soldier’ (member) Bill Hunter. Bill also served as Australian Paralympic team chaplain in Kyoto and got to know Alistair before the games.

Alistair told Bill and the audience at GSA that “winning a silver and bronze [in Kyoto] was one of my highs and lows. Of course, I wanted gold, but at the same time, I was really glad to get on the podium which is an incredible achievement in itself.

Celebrate Easter with us at your local Salvos.

Part of a close-knit family, Alistair was born in Nhulunbuy (NT) as the youngest of five children, with his father working in Aboriginal and Torres Strait Islander communities.

He said: “I lived there until I was five and I remember going to the beach, going crabbing, fishing that sort of thing. I thought for a long time that everyone had a childhood like that.”

The family then moved to Darwin and Alistair followed in the footsteps of his sporty older siblings, participating in athletics, rugby league, competitive swimming, triathlon and more.

“Through triathlon, I found cycling and really fell in love with that,” he said.

Tragically, just before Christmas in 2006, at the age of 11, Alistair lost his dad. His dad’s death deeply impacted the whole family, but Alistair also remembers a great deal of love and support surrounding his family.

In his mid-teens, the keen sportsman faced another challenge, but one that ultimately opened the doors to the Paralympics.

Alistair had attended church as a young child with his family, but said he fell away and didn’t give much thought to faith in his teens and early 20s.

“I don’t think we went to church that much in the later part of my high school,” he said. “When I moved to Melbourne, I had two sisters living there and they were going to the local church my mum and dad had gone to many years before.

“That became a social interaction for me and I really enjoyed it, but I hadn’t really put any thought into my faith. I went to Rio [still] not thinking about it too much.”

One of Alistair’s brothers had become a church pastor by this time. He gave Alistair a book – Mere Christianity by C. S. Lewis – and asked Alistair what he did believe about God.

“I had a bit of a ‘penny drop’ moment at 22 or 23,” Alistair said. “I thought I could ignore this and go one way, or acknowledge it. The realisation that God was real was very clear. To me, it wasn’t a decision, it was a realisation - and that is the only way I can describe it.”

A life grounded by faith and care

Alistair said: “When I didn’t have a faith pathway, my sport was everything and meant everything.”

Today he is committed to supporting others and believes that desire has grown as his faith journey has developed.

“I have also struggled with mental health issues,” he said.  “That is something I [now] look to support others in. On the way to Rio, the weight was something I never got perfect. I became obsessed with it and then I never took my foot off the gas for two years, which developed into an eating disorder. There was a flow-on with depression and anxiety.”

Alistair began seeing a counsellor and now also works to engage with and support others who may be struggling. He said: “I look at juniors or teammates, or anyone really, and look to have the discussions with them about their challenges including mental health.

“I like to push and encourage these chats and look at how I can use my position in sport not to just further myself, but find more ways I can support people.”

The sacrificial love of Easter

Talking about Easter, Alistair said: “When I think about Easter, it is with an understanding of what Jesus and God did for us. It is about selfless sacrifice.

“Sport can be quite self-focused and selfish, and so that sacrifice encourages me to care about others and live my faith as much as I am able. I find it really hard to talk a lot about my faith, because it is very personal to me, but more than anything, I want to authentically live it out.”

We invite you to explore the hope we have in Jesus.