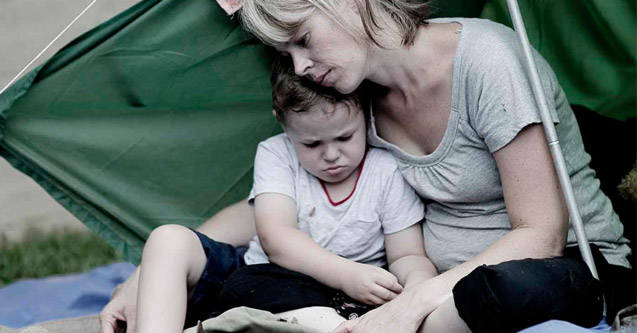 Back when Nikki and her children were living in a tent, she tried to make the whole thing seem like a big adventure. But the stress and shame of being homeless almost too much to bear.

Nikki will never forget the day she went to receive a hamper from the Salvos. Already embarrassed that she was asking for help, she was mortified when she saw one of the mothers she knew from her son’s primary school. The other mother was there to donate gifts; Nikki was there to receive them. “I had to run away and hide behind a bin,” she remembers, “I was so ashamed and embarrassed.”

It was after the breakdown of her marriage, when she was a young single mother, that Nikki experienced many years of extreme poverty. With a baby and a toddler, Nikki didn’t have a chance to focus on a career and took on ironing and cleaning jobs to make ends meet. But sometimes it just wasn’t enough and she would find herself at the Salvos, feeling like she was a complete failure.

“At those times that I accessed and asked for help, I would literally not be able to feed my children.”

She remembers the day the family snacked on a box of ice-cream cones – literally the only thing left in their pantry until Nikki was due to be paid for some ironing the next day. Being unable to provide for her kids was .

Poverty has a way of isolating people and Nikki was no exception. Unable to afford rent, she had to move away from her support network to a more affordable area. Thanks to the generosity of kind-hearted people like you, the Salvos were there again for Nikki when she had no one else to turn to.

“I remember this captain who helped me with my electricity bill ... I was just so grateful I started to cry.”

Later, when the kids were a little older, Nikki took the opportunity to study law. It was during this time, however, in-between houses and unable to afford bond, that Nikki and her children had no option but to live in a tent until she saved the money.

She remembers trying to make the whole thing feel like an “adventure” for the kids but, in reality, the stress and shame  eating her up inside. There were days when the family couldn’t even afford a loaf of bread, and Nikki kept the children home from school because she had nothing to put in their lunchboxes.

Although she did eventually gain her degree, Nikki didn’t pursue a career in law because “having lots of money wasn’t important to me anymore after going through such extreme poverty.” She instead chose to write and is now a celebrated author, passionate about bringing the reality of poverty into the public spotlight. She is also a regular supporter of the Salvos and donates at every appeal time.