Find out more
You are here: Home › About Us › News & Stories › Stories › Manu Feildel Serves Up Hope At Maroubra Salvos 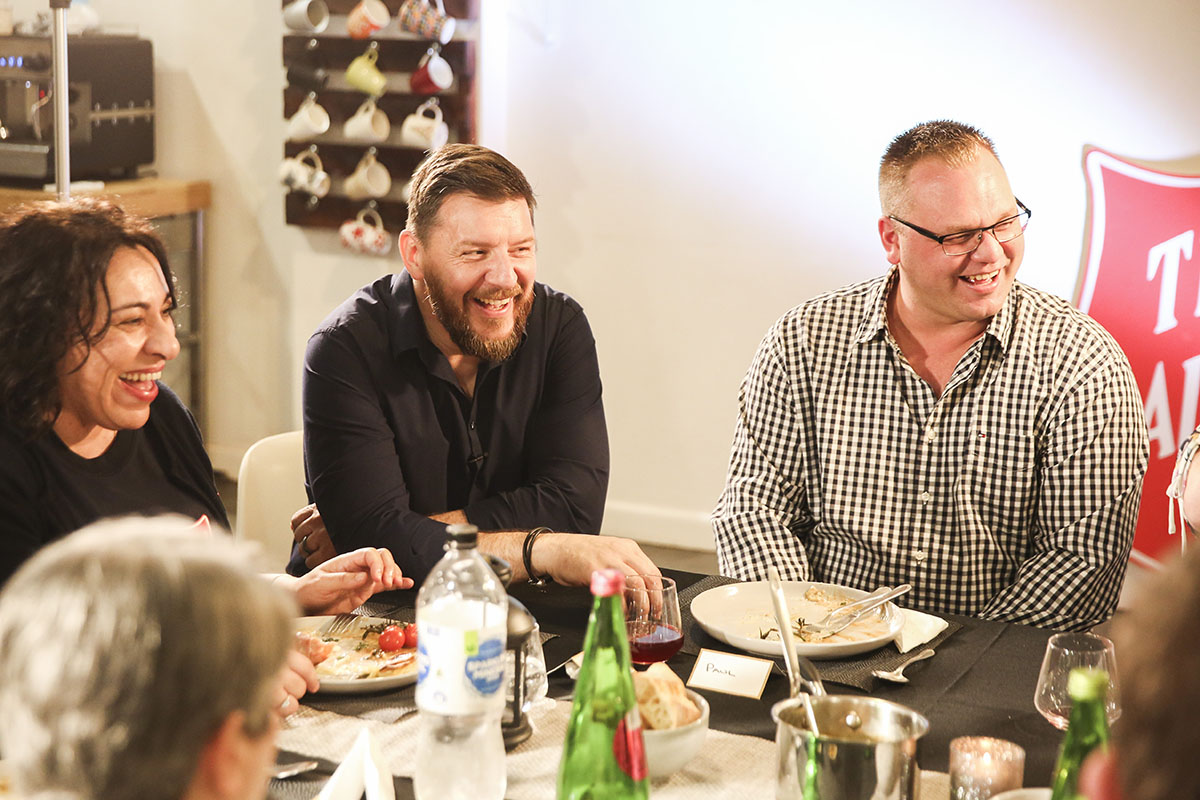 Right now, we could all do with a little bit of hope and nourishment for the soul – especially if it is plated up by celebrity chef, Manu Feildel. Eight deserving Salvos got just that!

Working tirelessly and doing all they can to leave no one in need during COVID-19, Jack, Connie, Dwayne, Dianne, Paul and Lauren were six unsuspecting but wildly deserving Salvos volunteers who were invited to a special night at the Maroubra Salvos. Unknown to them, their dinner was being prepared by the popular chef, Manu Feildel.

On 9 July, Manu agreed to prepare a special two course meal for eight deserving people at his local Maroubra Salvos. A vocal supporter of The Salvation Army, he decided to show his appreciation through what he loves – cooking! As he puts it, “it’s a terrible time at the moment and where we can help [we] should be helping. That’s why I’m happy to say thanks to these guys, because they’re doing a fantastic job…they’ve been doing it for a long time.”

Manu cooked the meals in his personal kitchen and then drove to The Salvation Army’s Maroubra Corps, where he was taken through a back entrance to the kitchen and put the final touches to the meals. 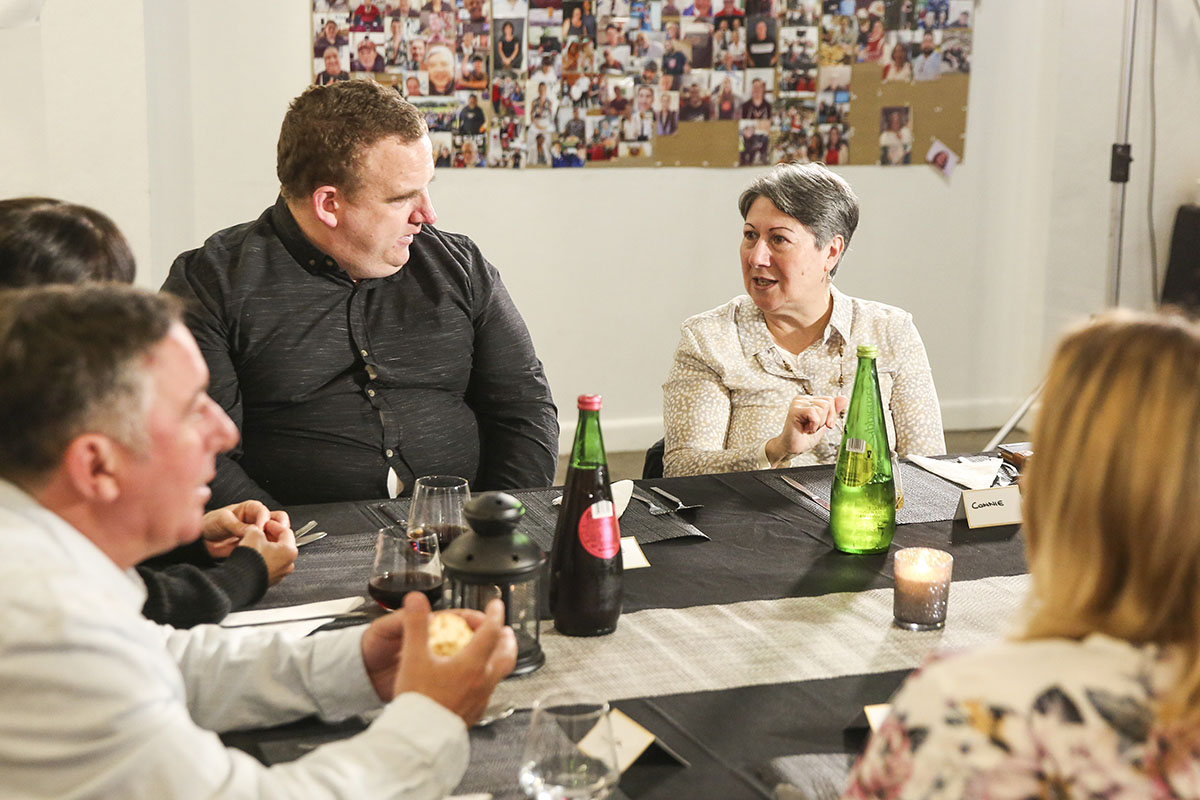 Jack started volunteering at The Salvation Army almost a year ago, when he needed to build work hours for Newstart. He loved the work and quickly became a part of the Maroubra Corps family. With experience as a chef, Jack often helps in cooking meals and is a super-hard worker.

Volunteering alongside Jack is Connie, who is supervisor of the corps’ kitchen – looking after the menu and allocating jobs. Joanne believes that without Connie and Jack, community meals wouldn’t happen.

As a community member and volunteer at the corps, Dwayne helps at the reception desk and with admin jobs when assistance is needed. He is also involved at Sydney Streetlevel and has been associated with the Salvos for almost a decade.

Dianne, who experienced addiction earlier in life, came to the Salvos through Pathways (drug and alcohol addiction recovery program) and is currently volunteering at the corps.

Paul connected with the Salvos at Petersham while undergoing recovery for a drug and alcohol addiction. While there, he met and was mentored by Major Steve Briggs. Through this, Paul found friendship and community, and got his first job working at Stanmore House, where he gained skills in catering and barista work. From there, he was promoted to running the café at the Salvos headquarters in Redfern – where he still works today. Paul also met his wife, Lauren, through The Salvation Army at Petersham.

First connecting with the Salvos as a teenager, Lauren fell in love with the work and impact it had on the community. She chose to dedicate her life to children and youth – a passion area for her – and is currently working for Youth and Young Adults in NSW (part of the National Youth and Young Adults Team) for The Salvation Army.

Maroubra Corps is family to a number of its volunteers. Often, many of those who come to the Salvos do not have a family of their own. Once here, they find companionship, a shared experience and even love – as was the case for Paul and Lauren, who met at the Salvos and married days before COVID-19 struck. 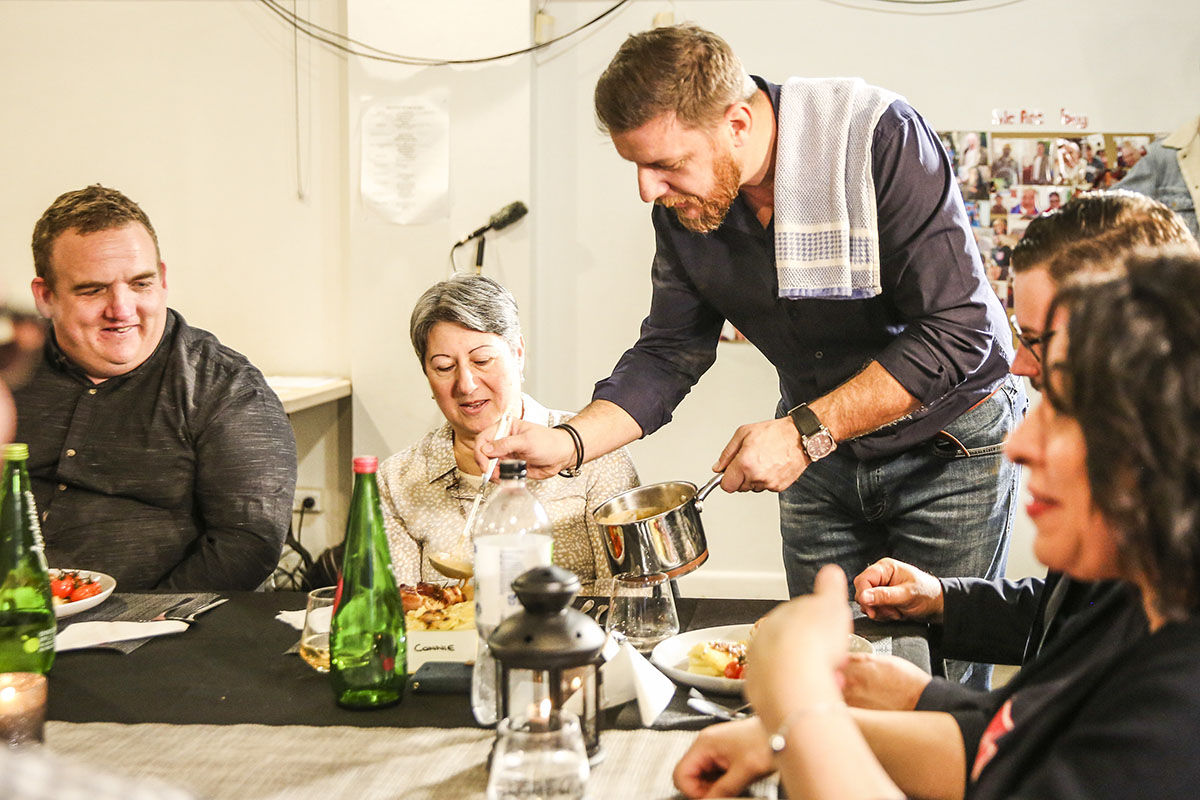 For the surprise evening, Manu prepared a main course of stuffed chicken breast with creamed spinach wrapped in prosciutto with a mushroom sauce, a sumptuous potato gratin and a decadent chocolate mousse with chocolate tuiles for dessert.

Walking out to the dining room carrying the plates, he was greeted with squeals of surprise and joy. Approaching each diner, he set their plates down with a cheerful hello before hand-dressing each meal with his signature sauce.

Following the main course, Manu served dessert, which was again met with applause and gratitude. The guests chatted with Manu and each other – laughing, sharing stories and enjoying the delicious meal the celebrity chef had prepared for them. When asked for a review, one of the diners proclaimed, “Honestly, one of the best meals I’ve ever had”.

Manu believes that giving back is the best thing, and that is certainly something all the guests of the evening have done tenfold – giving back to their beloved community and making sure they can help those who need it most.

The night ended on a positively successful note with Manu taking photos with the guests and Keven scoring the meal a perfect ten out of ten!