You are here: Home › About Us › News & Stories › Stories › Latest Research Into Domestic Servitude In Australia

Would you work for no wage? Could you survive in a foreign country without any identity documents or assistance?

This might sound improbable, but it is the reality for approximately 15,000 people currently living in Australia under degrading slave-like conditions.

The majority of individuals trafficked into domestic servitude have been foreign nationals, often deceptively recruited with the promise of money or permanent residency. In many cases, their employers are high ranking foreign embassy officials with diplomatic immunity. Once here, victims are prevented from moving about freely and are coerced or forced to work for little to no pay. A large percentage of these workers are often victims of trafficking, debt bondage and servitude, and are commonly subjected to physical, sexual and/or emotional abuse.

Giving hope where it's needed most

True to our mission of giving hope where it’s needed most, The Salvation Army has been operating Australia’s only dedicated safe house for women who have experienced trafficking or slavery for ten years. The service also supports a number of community-based clients, including men, women and young people.

Over the years, Safe House clients have been deprived of food and subjected to physical abuse, threats, and intimidation in the form of sexual harassment and assault, denial of medical care, control of their movement and communications with other people, invasion of privacy, and excessive work for minimal or no pay. The Safe House provides outreach support and case management to these individuals, assisting them to rebuild and overcome the degrading and humiliating conditions they experienced.

Our research into domestic servitude 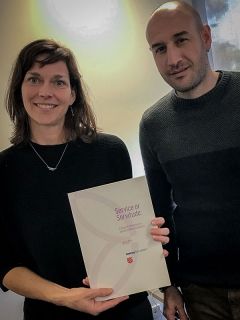 The Salvation Army has also worked for many years to bring these stories into the public eye and to advocate for stronger protections for migrant domestic workers in Australia. In an effort to end this modern day scourge, The Salvation Army, in collaboration with the Mercy Foundation, an Australian organisation committed to social justice and equality in the Australian community, has conducted valuable research on the mistreatment of domestic workers in Australia. The research (Service or Servitude: A Study of Trafficking for Domestic Work in Australia) compiles known data on migrant domestic servitude in Australia and contributes new information from the Safe House to provide a comprehensive view of the issue.

The research was presented on June 11, in honour of International Day of Domestic Workers, and was followed by an advocacy planning workshop in Canberra to identify priority areas for next steps.