You are here: Home › About Us › News & Stories › Stories › Jaydens Story Shining The Light To Help Others To Find The Way

Jayden's story: Shining the light to help others to find the way 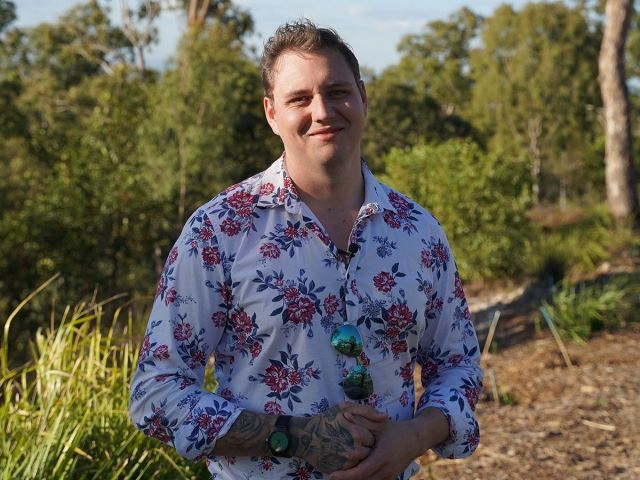 Just a few years ago, Jayden was struggling in addiction and fear. But, with the support of The Salvation Army and a growing faith, he has seen his own life transformed and is now also passionately committed to helping others.

“I was once a drug addict. Now my mission is to stand at the top of a cliff, creating signposts pointing to a better way – empowering others to step into their destiny, not off the cliff.” – Jayden

As the owner of a socially-focused catering company, and mentor to many, 26-year-old Jayden says his passion is to help young people understand they don’t have to “step off the cliff” into addiction.

Less than five years ago, though, Jayden was in an ice-induced psychosis, hiding in a public toilet from imaginary attackers. Months before that, he was hiding from very real foes – drug dealers he owed large amounts of money to.

As a child, and in his early teens, Jayden had been relentlessly bullied at school. He dropped out in Year Nine to become an apprentice chef. Later, after a devastating break-up, he was encouraged by a close friend to try the drug ice. And at first “it seemed to take away the pain”.

“There were a few rock bottom moments,” Jayden shares. “Just before [one] Christmas, I knew my son was being born, but I wasn’t allowed to see him. I threatened to kill people in the hospital. I hated the person I’d become.

“People were chasing me and, if I didn’t get them the money, I was going to be killed. I called my dad to get me the money and he gave me the money, but the condition was I had to go to rehab.”

Jayden entered The Salvation Army Brisbane Recovery Services, known as Moonyah, at the age of 21, but was asked to leave for aggressive behaviour.

It was during this darkest time, Jayden says, that God began to work in his life.

Searching for the light

“When I was around 11 years old, I’d had a vivid dream of a very distinctive house,” Jayden says. “It had yellow bricks, a broken door and broken glass windows. The short story is that when I got kicked out of rehab the first time, I went to a new area I had never been, to use drugs with someone I knew. As I walked into their house, in a town I’d never been to, it was exactly like my dream ten years earlier. It was just amazing.”

Jayden says that many other “really amazing things happened during that time”, and he prayed his first prayer.

“I knew they had no room in rehab, and I had no money to pay entry either. But my prayer was if that was where I was meant to be, I’d get a place and I did,” he says.

“[In] my first few weeks back at Moonyah, nothing much changed. But I kept praying even though I didn’t have an understanding of who God was.”

Off the drugs, but still struggling with many issues, Jayden then had an encounter that changed his life.

“One night, I looked up out of my window and there was a light and it suddenly got super bright and I saw a bright, white light coming towards me,” he says. “Then it gently kissed my face. Then, just as suddenly, it was gone and I fell asleep feeling truly safe and secure for the first time in a very long time.

“I completed the program and I gained a determination and confidence that I’d never had before.”

Jayden went on to complete every extra course offered at Moonyah, and accepted invitations to church, men’s camps and more. He also ran a cooking course at Moonyah and then became the centre’s chef.

Making the most of a second chance

Jayden now shares custody of his child and, in 2020, he launched his own catering business.

His business offers meal prep for busy families and catering for special events, and features a cookery program for schools, youth detention and addiction recovery services.

Jayden also volunteers in recovery outreach, one-on-one mentoring and is involved in supporting others through his local church.

“I’m convinced connection is the opposite of addiction,” he says, now believing that connecting with others is essential.

With many strong mentors behind him, Jayden has also undertaken extensive counselling to work on his own issues of healing and identity.

“I now understand that to gain freedom, we often have to face the things we fear the most,” he says.

“Because I saw that transformation happen in my own life, I know it is important to pass that story on to others. For me, it is completely okay to have struggled. To go through what I have gone through and now to be able to reach the people God has put aside for me to reach – that is incredible.

“I know there is hope for everyone. When I had that dream, and saw that house, I was still using [drugs], but God met me there. There is no point that we have so ruined our lives that God can’t pick us back up again.”

Jayden says he is certain the light of God’s love – made available through Jesus’ death and resurrection – was shining in his life, even in his darkest times. He just had to stop running and acknowledge it.

“I’ve experienced a lot in my life already, and the one thing I am absolutely sure of is that God transforms lives,” he says. “And that transforming light and love of God, through his son Jesus, is the miracle, the hope and the message of Easter and beyond.”

Find out more about the message of Easter