You are here: Home › About Us › News & Stories › Stories › Inala Corps Serving Their Community Over Breakfast 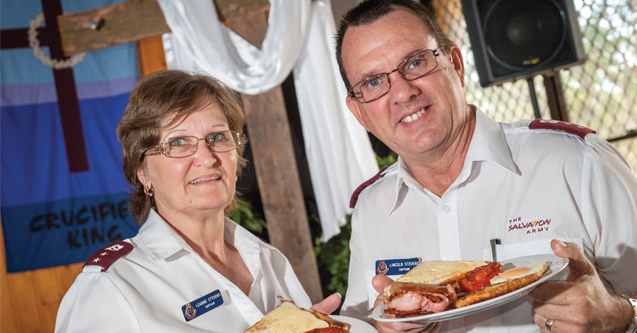 A Salvation Army centre in Brisbane is literally serving up a new way of doing church in their community.

For the past three years, Captains Lincoln and Leanne Stevens, who are the Corps Officers at Inala Salvation Army in Brisbane’s south-west, have replaced their traditional Sunday morning service with a community breakfast, allowing their congregation to build relationships with local people and support them in the ups and downs of life.

“We aim to give people a really good meal at the breakfast, but we are also getting to know them, becoming their friends and creating a sense of community and belonging with people they can trust,” Captain Lincoln says.

“By doing this over time, we are seeing what issues and needs they have and can help direct them to the right support services. As a result, people are coming and doing things with us, getting to know God, and seeing dramatic changes in their lives.

“It’s not a quick process, though, but it’s a process that is certainly working here in Inala.”

Somewhere around 80-100 people come to the breakfast each Sunday. Local community members also assist with the setup and food preparation, working alongside corps members to serve others.

When the Stevens’ first came to Inala in November 2013, they quickly realised there were a lot of people in the area who were lonely, struggling to make ends meet and facing tough life circumstances.

From the beginning they sought God’s direction.

“God told me very clearly that the church in Inala would not be church as we know it,” says Captain Leanne. “He also gave me the Bible verses from Ezekiel 36:34-36 – about rebuilding the wasted and desolate places. At the same time, Lincoln had a vision of a hall full of people sharing a meal.”

The Stevens’ were convinced that God was taking them back to basics, doing what Jesus did, and what William Booth (The Salvation Army’s founder) did in the early days of The Salvation Army.

“We can invite people to church until we’re blue in the face and some might come, but they often don’t stay as it’s a culture shock to them and they don’t feel accepted,” Captain Lincoln said.

“If we invite people to a free breakfast where they sit with a bunch of Christians, get to know them and can get help for them through the services we offer, then we can more naturally invite them to the Alpha course, Bible studies, Mainly Music and other things.

“We believed more people would want to come and, in turn, get to know Jesus, and we are seeing them coming now.

“Our church members have always had a heart for community and they are a vital part of all that happens here … we couldn’t function without them.”

Initially, an interactive Bible study at the church on Thursday nights, and a monthly non-traditional celebration service during the breakfast on Sundays, replaced the traditional morning worship meeting.

This has recently been changed to an interactive Life Group, including worship, that follows the Sunday morning breakfast.

“This will make it easier for people who are here already for the breakfast to come in and stay,” says Captain Lincoln. “A few community folk who attended the Thursday night groups, and have been saved, have started coming and a few other people have said they will come too.”

Captain Leanne explains that getting people to the Life Group is not their end goal, but rather, having a positive impact on people’s lives and “letting them see Jesus through us”.

“We have an impact on their lives because we spend time with them, not just at the breakfast, but in helping them through the issues they face. And we do believe that one day we will see them saved as well,” she says.

“Home League has grown from 10 to nearly 30 ladies and our Mainly Music group is expanding too. The extra numbers all come from the breakfast. They are involved, and even if they’re not yet coming to Life Group, they are exposed to God and there are opportunities for them to develop faith. We see this in their conversations, their behaviour and how they live their lives.

“The words from Ezekiel that God gave me are evident – there is healing and beauty in what once was empty and desolate.”

One lady started coming to the breakfast through the Salvation Army Connect Site, became involved in different activities, and was then trained to work on the Connect Site herself. She has become a Christian.

Another lady struggling with mental health issues became unhappy with some of the safety policies at the breakfast. She returned to the breakfast, though, and has now asked for a Bible and worship music.

“Inroads are being made,” says Captain Leanne. “They may not be in Life Groups yet, but they are finding God in other ways.”

Connecting community members to Salvation Army and other services is a key role of the Inala Corps.

The team has been able to help a girl in a domestic violence situation and also connect her with the Department of Housing, who arranged better accommodation for her as where she was living was uninhabitable. She now attends the Inala breakfast and other corps activities. The team also assisted her to find appropriate schooling for her son, who is now doing well and is happy and settled.

“These are the gems we hold on to, and they’re coming up more regularly,” says Captain Leanne. “It’s challenging, and sometimes we have no idea where to start. It can also be heartbreaking, when situations arise where we can’t help, but we rely on God to lead us and give us the strength for what he has called us to do.”

The Stevens’ are again asking God for direction for the future. “We don’t just want to go ‘well this is what we’re doing and that’s it’,” Captain Lincoln said. “We feel in our hearts there is more, and are asking God to fine tune what we’re doing.

“That could include a non-traditional mini-church service, or something else. We will have to wait and see!”