Find out more
You are here: Home › About Us › News & Stories › Stories › Grahams Story 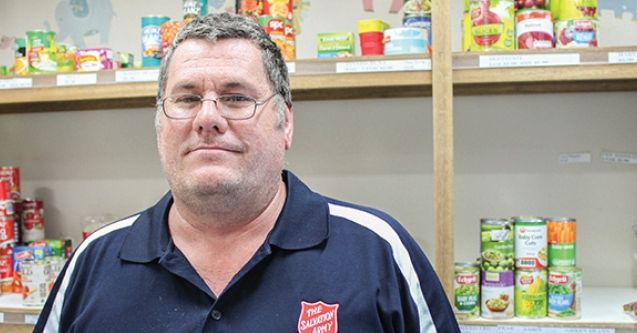 Graham had always managed to find work. So when he left his job after six years as a casual forklift driver, he thought it wouldn’t be long before he found new employment.

He applied for jobs online with no response and approached business after business with no luck. As the bills mounted, Graham became increasingly stressed and he and his wife Jody (who also has medical issues) even found themselves without a home for two weeks after getting behind in the rent.

Jody had occasionally attended the Balga Salvation Army Corps (church) in Western Australia, and so the couple decided to make an appointment to seek assistance through the associated Doorways service for food and bills.

Graham says: “I was brought up to never ask for help, you look after yourself. But I was struggling, my wife was struggling and I was supposed to be the tough guy; so I was hiding being depressed because I didn’t want to upset my wife more.

“While it’s still a struggle to make ends meet after rent, The Salvation Army helped us start paying some bills off and get back up on our feet.”

Even more importantly, Graham says, through the relationships forged “they (the Salvos) became like our family”.

Graham now volunteers almost every day at the Balga Salvos centre. This includes collecting fruit, vegetables and bread from a local supermarket to give to people calling at the centre for assistance.

Sadly, he says, too many people come in who cannot even afford a loaf of bread after paying their rent.

“I do almost anything that needs to be done around the place,” Graham says. “I want to do what I can to pay back the kindness I received when I was in need.”

Balga Salvos is a busy place. As well as church services and related activities, the centre runs a range of midweek programs for children, such as Just Brass and Mainly Music, and there’s an Early Learning Centre for children six weeks to six years. Also on site are a child health centre, emergency assistance (Doorways) and management of a housing project, which involves more than 80 properties. There is also a community garden.

The Balga Salvos leaders, Captains Darren and Megan Aitken (pictured above), say: “The Salvation Army Balga Corps network has walked alongside thousands of people who struggle through hardship and injustice on a daily basis.

“We have fought alongside people who have no voice and no hope, and we have been blessed to see positive transformation to individual lives – children, adults and families. We are so proud of the incredible efforts that the Balga Salvos team have given through their dedication of time and energy in living out our theme of ‘open to receive all that God has for us’.

“It’s that vision that (Salvos founder) William Booth had of The Salvation Army being at the centre of the community.”

Your kindness helps provide essentials to families struggling through hardship.