You are here: Home › About Us › News & Stories › Stories › Easter The Power Of Hope Redemption

Easter - the power of hope and redemption Over many dark years, Edward and wife Beola experienced fear, hunger, loss and uncertainty. They were forced to flee their country, and also lost many loved ones. Still, they held firm to a path of hope, praying that God would redeem their situation. Today Edward is an Australian citizen. He shares his story this Easter.

One of 13 children (six siblings and six step-siblings) from a middle-class family in Sierra Leone, Edward studied printing technology and social welfare at university. After completing his studies, he worked in a bank, to save money to establish his own printing business. But life changed forever for Edward and Beola with the outbreak of civil war in 1991.

Told they were on a death list, the couple travelled by boat under the cover of darkness to a landing spot just over the border in Guinea. From there, they walked for many weeks to a United Nations (UN) refugee camp, knowing there was every chance they might die, or be killed along the way.

They were not alone.

Over the next 10 years, many thousands of people would be massacred in Sierra Leone and millions forced to flee their homes for refugee camps in neighbouring countries.

Edward and Beola lived in the UN camp for many years, together with thousands of other refugees, often in difficult, dangerous and even deadly conditions.

Retelling his story, Edward says: “My faith in Jesus grew in those hard times. It was a time of no confidence, no promise. You just have to live one day at a time. The only thing you can do is pray and believe God’s going to change it.

“There was always some answer to prayer. In the middle of nowhere, something would happen. Not once, not twice, but so many times.

“[Now,] our faith that something is going to happen through prayer is not doubtable. You pray and believe God will do something and you pray about things and you see something happen. God definitely answers prayer!"

During their time at the camp, the couple began attending a church. In one of many answers to prayer, they happened to meet someone at church who told them Beola’s aunt had settled in Australia.

With this news, they began the long process of negotiation with the UN and Australian immigration. Ongoing support was also provided by The Salvation Army church at Auburn (NSW) – a church with a large, multicultural congregation and ministry of support to refugees.

A new life with the Salvos in Sydney

Beola made contact with her aunt and applied to come to Australia. Finally, in 2009, Edward and Beola arrived in Sydney, and were met at the airport by a group from Auburn Salvos.

Edward says the couple knew nothing about the Salvos, but: “[After we arrived in Australia] we came to church [at Auburn Salvos] on the following Sunday. It was so exciting and so emotional – people we had never met bringing us flowers … [then] people came to the house with food …

“That enlarged my heart.”

The couple soon dedicated their lives to serving God and caring for others, becoming Salvation Army ‘soldiers’ (official members). Beola secured work in aged care and Edward went on to become concierge at Auburn Salvation Army. He then took on the role as assistant minister of the Salvos church (which is one of a range of Salvation Army services and programs at Auburn). 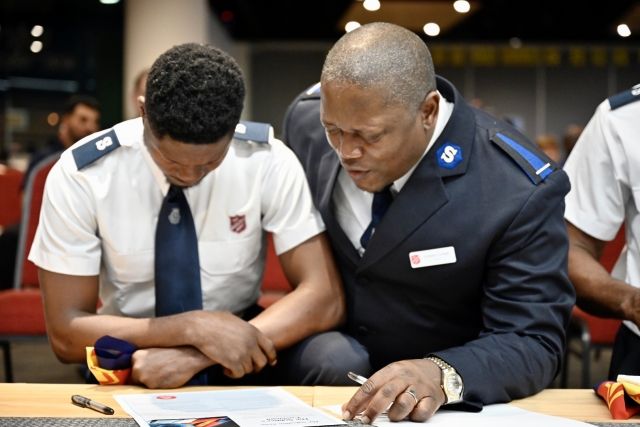 In early 2022, after more than 12 years in Auburn, the couple moved to Melbourne, to study fulltime for Salvation Army leadership.

“It’s a long journey. I’ve learned a lot from this walk,” Edward says.

“There were times when it was really hard, but [even] those challenging times were a hidden blessing for me to grow. I’m really, really grateful to Jesus.”

Find connection and hope at your local Salvos this Easter.
Find events in your local area here

When asked about his journey so far, Edward says his story is like the story of Easter, which “is all about redemption”.

“Me and my wife are a living example of hope. God is always ready to redeem us from whatever struggle we go through. If someone is doubting, put your faith in Jesus. [God’s word says] he is the author and finisher of faith.

“I want people to see that God can bring you from nothing to something. That is our story. I was not born in Australia, English is my second language, but here I am [in Australia]. Now I am studying, but I have been helping people, speaking to hundreds of people on a Sunday every week. I have been working with parliamentarians, community leaders, on television, magazines, videos talking about the work at Auburn Salvation Army.” Edward says that no matter how terrible the challenges, faith is important, and even if prayers are answered in unexpected ways, and in the midst of fear and suffering, there is always hope.

He says: “My faith sustained me in that dark time. That was the only hope that we had.

“The best gift I can give anyone is to introduce them to Jesus. I say to people, ‘Come and taste and see what [God] can do’. This is not about rituals, not about formulas. Just [open your heart] and see what the Lord can do.”
If you need help and hope this Easter, support is available here