A marine mechanic, Ben had an enviable life in a seaside suburb, building his career. He says: "I was very comfortable. I had a race car, motorcycles and my own home - a wonderful life."
But then came the accident. Ben was struck by a 3.5 tonne piece of steel that fell from a crane at work. He suffered serious injuries, including a severely crushed leg. 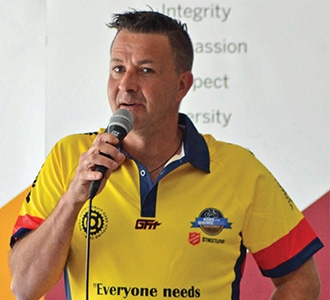 Surgery followed and Ben was left with a battery and hard-drive in his hip and wires into his spine, which left him unable to continue working in his trade. He was also in great pain and became increasingly dependent on heavy prescription medication.

His doctor warned of the dangers of staying on the medication long term, so Ben stopped, but instead started drinking to deal with the pain.

He says: “I quickly fell into depression, then alcohol and drug addiction. I ended up losing my marriage, my home, even my dogs.
“I just had a great sense of worthlessness.”

Ben found himself living in his car, wasting away physically and plagued by suicidal thoughts. At one stage he crashed his car at high speed into a tree while under the influence of drugs.

After the crash Ben slept rough on the streets and in squat houses. He also spent time in Salvation Army crisis accommodation.

It wasn’t until he was accepted into The Salvation Army Brisbane Recovery Services centre, better known as Moonyah, that his life began to turn around.

“I came into Moonyah a very angry man with no will to live (but) met some amazing people,” he says.

“Although I had a strong Christian faith in the past, it was at Moonyah that I turned my will over to God who has saved my life now a number of times.”
Ben has since completed the recovery program and lives independently. Throughout the journey, Ben also became a regular at The Salvation Army Streetlevel Mission in Brisbane, which offers meals, services for those facing homelessness, work for the dole, counselling, material and spiritual support, community space and more.

Ben says: “I’m probably the happiest I’ve ever been in my life. I found some absolutely amazing people at Streetlevel I really look up to. I love them, I love the place.”

He now has a burning desire to help others and has studied and completed a Certificate 3 in Community Services. He also recently volunteered as team mechanic for the charity fundraising bicycle ride from Sydney to Brisbane, raising funds for Brisbane Streetlevel to provide street swags, independent living courses and supported housing initiatives for people who are homeless.

“The Ride for the Homeless and funds raised will support people who do not have anywhere to call home with the type of resources I have personally needed in the times that I had nothing,” Ben says.

Your generosity enables services like Streetlevel to transform lives and give hope.