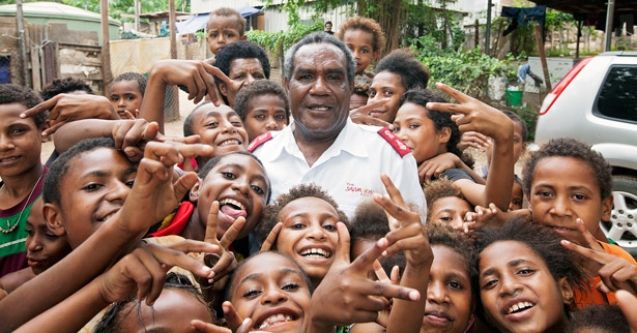 Ministry in Papua New Guinea has always been close to the hearts of many Australia Eastern Territory officers.

Pioneer officers from the Eastern Territory, then-Majors Keith and Edna Baker, officially began the Army’s work in PNG in 1956. When he first set foot on PNG soil, Major Baker declared: “God give me PNG or I die.”

Salvation Army ministry began with a meeting at Kila Kila Barracks on 21 October 1956. A short time later, PNG celebrated its first Salvation Army soldier, a young student named Kei Geo. The ministry continued to grow, spreading throughout the country and meeting needs such as education and medical services. PNG officially became its own command in 1994, and then, in December 2000, was elevated to territory status, although continuing its strong ties to the Australia Eastern Territory. More than 350 Australian officers have served in PNG over the past 60 years.

The Army’s NSW and ACT Divisional Commander, Lieutenant-Colonel Miriam Gluyas, spent three years in PNG as its chief secretary. “My prayer would be that they will rise up and see all that God has for them,” she said. “That they will live like Jesus and for Jesus, and live and walk in personal freedom, in a safe nation, and in the total freedom of Christ.”

Lieut-Colonels Kelvin and Julie Alley, Australia Eastern officers currently serving in PNG, echo these sentiments. “I have been able to visit many health centres and posts in PNG,” said Lieut-Colonel Julie Alley, Territorial Director of Health Services and Territorial Secretary for Women’s Ministries in PNG. “It is so rewarding to see the extent to which The Salvation Army is a vital and essential part in the health and community life of the ordinary person living in the villages of Papua New Guinea.”

Lieut-Colonel Kevin Alley, PNG Territory Chief Secretary, added: “It is my desire to see the territory become self-sustaining financially and for the Lord to bring a generation of officers through to leadership within their own territory, and for PNG Salvationists to capture afresh the joys of discipleship in order for The Salvation Army in this country to be a vital force for good and for godliness, making a difference to the lives of the people of Papua New Guinea.”

The Salvation Army’s world leader, General André Cox, and Commissioner Silvia Cox, World President of Women’s Ministries, were the special guests at two congresses to celebrate 60 years of The Salvation Army’s work in PNG from 23-28 June. The northern congress hosted open-air meetings at Goroka’s National Park, while the southern congress was held at the Roy Bungay Memorial Hall at the Army’s territorial headquarters in Boroko, Port Moresby.

“There is a real sense of celebrating our God who is continuing to transform lives because of the mission and ministry of faithful Salvationists over the last 60 years,” said Major Heather Unicomb, an Australia Eastern Territory officer who is the PNG Territory’s Assistant Secretary for Program. “There is an amazing bond on the spiritual level between the Australia Eastern Territory and Papua New Guinea.”

Find out more about the celebrations