You are here: Home › About Us › News & Stories › Stories › Art Reflects Tanitas Heart For Country In caring for and protecting Country, Tanita says the land is healed and respect is shown towards Aboriginal and Torres Strait Islander peoples and their culture, history, lore, spirituality and kinship.

“As [an] Aboriginal or Torres Strait Islander, Country is the most important thing, and everything else falls into place around that,” she explains. “From Country comes culture and lore. It is literally part of our identity, and people have to respect and take care of our lands and waters, no matter what their race, because at the end of the day, if you are damaging Country, you are damaging people’s identity.”

Tanita grew up in the Aṉangu Pitjantjatjara Yankunytjatjara (APY) lands in the remote north-west of South Australia, and it continues to inspire her today. She was born in Alice Springs but spent most of her childhood living in and around the Ernabella (or Pukatja) region, in what she says with a smile was “the middle of nowhere”.

But, far from feeling isolated, Tanita says the experience was beautiful and meaningful. She says it has given her a connection to Country that inspires her art and gives her a deep sense of belonging. Tanita’s parents later moved the family south to Port Augusta to access a higher standard of education for their children, but it is the early memories that she holds dear.

“My favourite childhood memories were living out on the homeland,” she says. “We had to grow our own vegetables. Dad would take us hunting, or we would go and put fences up with him to stop livestock from entering. Mum would teach us to cook. Living there and being taught by Mum and Dad has taught me to be a strong and independent Anangu woman.”

Tanita shares that all of her art is about these childhood memories.

“The memories of going out with my family, learning about bush tucker and how to find it, the excitement when we found tjala (honey ants) and maku (witchetty grubs). Living on the homeland, we often rode our horses and went walking around to look for lizards, or I would teach my siblings how to make wiltjas (shelters made from sticks). Walking on the red sand dunes surrounded by the spectacular countryside, the blooming wildflowers and the miles and miles of spinifex. These are the memories I will carry with me for the rest of my life.”

Tanita learned traditional dot painting as a child on her mother’s lap. Her grandmother and an aunt were also artists, depicting family stories and childhood memories in their art.

“I’ve always had that interest in art,” says Tanita. “When I was old enough, I would ask Mum to do the design and ask if I could dot it. After a couple of years, she said, ‘You know what you are doing, so give it a go and design your own’.

“I love to paint about my connection to Country in the APY lands and parts of the Northern Territory. You don’t really know how much of a connection you have, or how strong it is, until you look back. I’m really proud of my art and where I come from.”

Tjala (Honey Ant) Hunting
This painting tells the story of myself and family going out hunting. The connection to community and being taught by elders how to hunt. 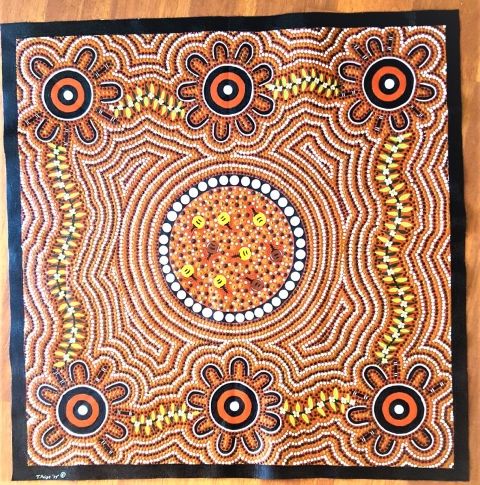 Maku (Witchetty Grub) Hunting
This painting tells the story of going out looking or Maku, walking around looking for the trees and having that time with family. 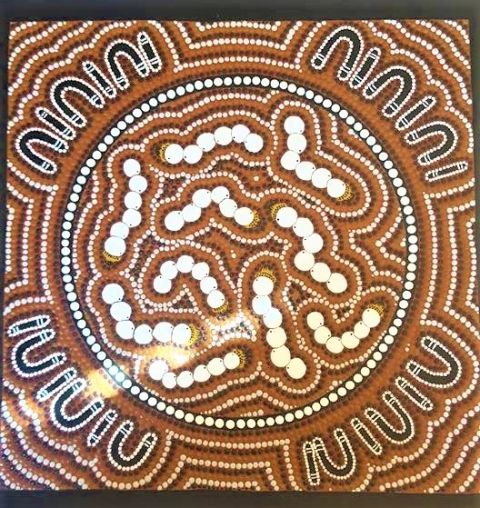 Bush Tucker
This painting tells the story of the different kinds of busk tucker we collect. The circles represent family, sitting around the fire telling stories of our people, culture and connections. Community Connection – Bush Tucker
This painting on the top tells the story of my country and community connection. The front draw represents my love of Tjala hunting. 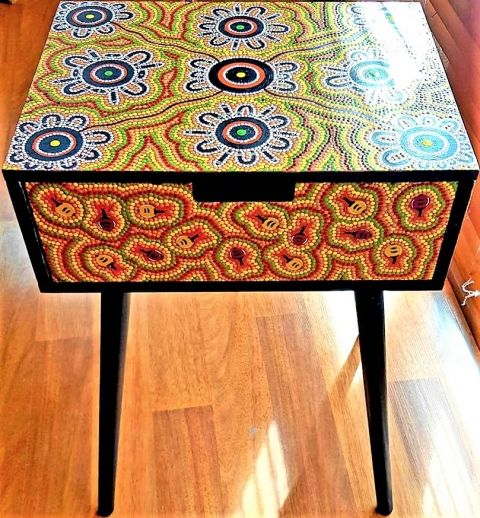 Community & Hunting
This painting tells the story of myself teaching my younger sibling and cousins how to hunt for Honey Ants, I love telling them about our connections throughout the communities and tell them stories about growing us out bush. 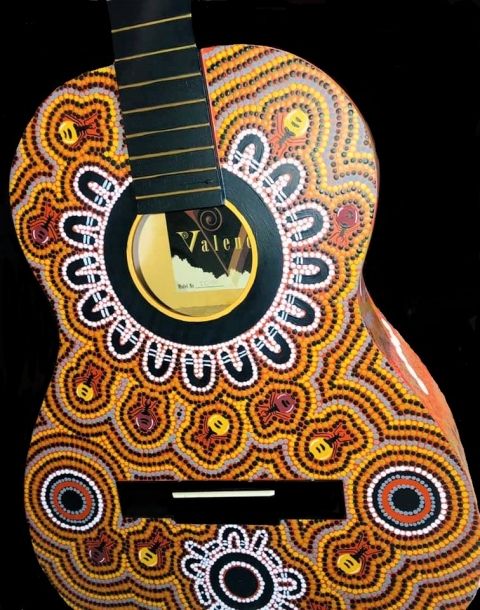 Last year, Tanita contributed to The Salvation Army Reconciliation Action Plan (RAP) artwork titled ‘Our Strength. Our Truth. Our Journey’. Her role in the design was depicting ‘Country’.

The artwork and the RAP are part of a larger initiative by the Salvos to build stronger relationships with Aboriginal and Torres Strait Islander peoples – relationships based on mutual respect, honest acceptance of past failures and hurt, forgiveness and moving forward together as one.

“For me, my connection to, and the importance of Country, is massive,” Tanita shares. “So, to have the chance to paint the RAP art background of Country was a blessing.”

Tanita is also passionate about her work with the Salvos. “I work as a transitional housing case manager, supporting community members on the journey to housing stability. I am also a youth worker within the Youth Safe Transport Service, which includes mentoring, running activities during school holidays and transporting youth to a safe place during summer.”

Tanita also works with Connected Horizons – a collaboration between The Salvation Army and Tjungu Services – where she mentors small groups of Indigenous youth and provides guidance, advice and an understanding of establishing identity in a modern world while staying true to traditional culture.

Tanita says that for the health and well-being of Aboriginal and Torres Strait Island children and youth, connection to Country and culture is very important.

“I have two kids and they were born in Port Augusta, but it is important, as they get older, to take them home, back to where I grew up, to show them and say to them, ‘This is your Country, this is your bloodline. You’ve got family at Uluru, all through South Australia and the Northern Territory’. It is so important for their sense of connection and identity,” she explains.

“I’ve organised trips out bush, just to take kids from town out to cook kangaroo tails, tell stories and give them some of the sense of identity and connection that I was blessed to get growing up. I am also lucky enough to have my father’s support as a male role model in our family to want to help these kids.

“They say it takes a village to raise a child, but it can take one person who genuinely cares to change that child’s whole life.”