Find out more
You are here: Home › About Us › News & Stories › Stories › An Extraordinary Cup Of Tea

An extraordinary cup of tea

A recent letter from Salvos supporter Verne Sheather shares the deep and life-long impact that a “Sallyman”, also known as Red Shield Defence Services personnel, had on her father and why she supports the work of The Salvation Army. 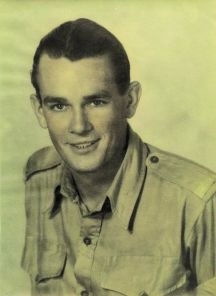 I am writing in response to your invitation in ‘On The Scene’, to share the story of why I support The Salvation Army.

My story is about my father, and an extraordinary cup of tea.

My father, Jack Thomson, served with the 2nd AIF (14th Australian Field Regiment, 54 Battery), in World War II. Like many returned servicemen he didn’t talk about the horrors he would have encountered; he only spoke of the mateship and recalled only a little of his experiences.

One of those recollections, told to me as a child, has stayed with me through the years.

In early September 1943, my father’s artillery unit landed in the north-east of New Guinea in support of an offensive against the Japanese who held the township of Lae, on the Huon Gulf. Dragging 25-pound guns, they needed to cross three rivers in the approach to Lae. As my father and others clambered up the banks of the second of those rivers, the Burep, they were greeted by a sign – “Wobble Inn”.

Here were the Salvos in the middle of the jungle, with billies boiling, serving the most welcome cup of tea ever tasted!

My uncle, now 90 years old, who served with dad, recalls he was focused on the threat of sniper fire as he emerged from the waters of the Burep. To be met by the Salvos instead of bullets....well, I can’t imagine how that felt. Although the Salvos were most likely under the protection of the infantry, who were in advance of the artillery, it still took exceptional bravery to just be there for the troops.

I will always remember my father’s gratitude and admiration for the Salvos, and the bravery of those who served that special cup of tea. That is what motivates me to give.

(With special thanks to my uncle, George Begg, who filled in the finer detail of that young girl’s memory, as my father passed away in 1997.)

Red Shield Defence Services (RSDS) personnel or “Sally” men, (and later also women) have supported Australian troops for well over 100 years. The ministry began in the Boer War in 1899.

During World War I, Salvos chaplains such as William McKenzie (1869-1947) who was later awarded the Military Cross, famously supported troops.

It was recorded that: “Chaplain McKenzie made Christ real to thousands of men. Up and down the fire-swept ridges he followed them, carrying food and water; tramping miles for their mail; by night cutting steps over treacherous patches which the boys must travel in the morning; praying with them; helping them to live; supporting them as they died. Burying literally hundreds of brave lads fallen in battle, he spent far into the night in his dim dugout, writing to their relatives.” This same spirit carried forward and during World War II , RSDS representatives offered comfort and support to troops, with “Hop In” tents and canteens set up in training camps in Australia, and near battlefronts including on the Kokoda Trail.