Find out more
You are here: Home › About Us › News & Stories › Stories › An Easter Reminder Of Gods Love

“Looking back over my life, I would say to people, ‘You think you are doing okay until you meet God, and then you know how much you weren’t doing okay’. Honestly, God just changed my life in such an amazing way.” - Heather

For the past six years, Heather and her husband David, both in their 70s, have poured their heart and soul into leading The Salvation Army’s work in the NSW country town of Grenfell. 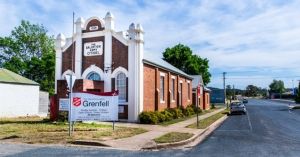 They will finally retire after Easter from overseeing the local corps (church), the Family Store and Salvos community support services, but they expect to remain highly active in the community.

Entering retirement with a firm faith in God will be a far cry from the world Heather entered in Glasgow, Scotland, 73 years ago.

Her father was a heavy drinker, who was verbally and physically abusive. She endured a troubled childhood and took a deep sense of shame into her adult life.

Heather was about four when her family immigrated to Australia, but sadly the old problems and patterns followed the family to their new country.

To escape her dark home life, Heather would often slip across the road to a little Salvation Army church. It was her safe place. There she was influenced by a man she knew only as ‘Brother Bruce’, who walked with the aid of crutches and callipers due to the effects of polio.

“He was a beautiful, beautiful man,” Heather recalls. “You saw something special in him. You wanted to be like him.”

Just before her ninth birthday, Heather prayed and gave her life to Jesus, but three years later, her family moved and her church connection was severed.

“Times were tough. We were often sent out to steal food because we didn’t have any in the house. A lot of awful things happened there,” Heather says, “the sort of things that made me think that God would never want me.”

After her second brother was born, Heather says: “Dad made it clear there wasn’t enough room for me anymore.”

Heather had met David by this time. David’s parents had already fostered a couple of girls, so taking in Heather was not a problem.

Are you struggling? Our prayer team are ready to pray for you. Share your prayer request here.

A year later, Heather was pregnant. She and David married (Heather was just 15 and David 19). Few family and friends gave their marriage any chance.

By her 20s, Heather had walked a long way from any relationship with God. But God had not given up on her. 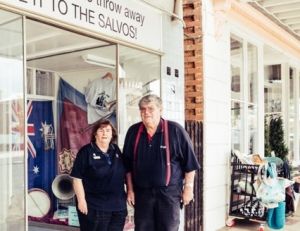 At 32, Heather and the family were living at Temora, in Central West NSW. It was Easter as the family drove into town. The only available parking spot was outside the local Salvation Army hall.

“Max (a member of the congregation) was in the street … he said I should go to church. I said, ‘Yeah, right’ and shrugged it off,” Heather says.

“The following Saturday, I went to a local hotel with other family members. We were in the beer garden and in came a whole lot of Salvos. I didn’t want to talk to them. So, I popped off to the ‘ladies’. In there (women’s toilet) was a lady who just happened to be a Salvo. They were everywhere! God had me cornered.

“My youngest child had been asking about going to Sunday school. After a bit of persuading, I went with her. And, you know, it was like coming home.”

Would you like to join us at church this Easter? Find your local Salvation Army here.

Heather recommitted her life to God and says: “I still couldn’t believe that he could possibly forgive all of those things that I had done. But he did.

“One day, in my kitchen, I was just overcome by God’s (Holy) spirit. I finally understood just how much love he had for me.

“I was kneeling on the floor in the kitchen and had such a feeling of absolute confidence that God would take me just as I was and he would make me into the person he wanted me to be.”

Heather worked in Salvation Army services for many years. The couple actively volunteered in their churches before taking over at Grenfell.

Heather has seen many family members also come to faith in Jesus and had the opportunity to reunite with her father and forgive him only weeks before he died. 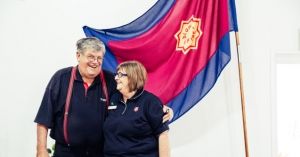 “Had you asked me 30 years ago how life was going, I’d have said ‘I'm doing okay'; but then when you meet Jesus, your life changes forever. There is just no comparison between the old life and the new.”

And as for those who doubted their relationship would last, almost 60 years later Heather and David are not only still together, but they have four children, 14 grandchildren, 26 great-grandchildren and around 35 foster children.

Learn more about Jesus and the Christian faith that transformed Heather’s life here.