You are here: Home › About Us › News & Stories › Stories › A Heart For The Isolated

A heart for the isolated 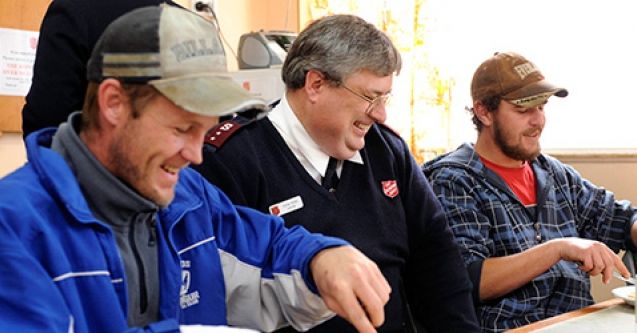 "For around 80 per cent of the young people who come to our breakfast service, it's the only hot meal they will have for the day." Captain Colin Young

It is the time of the Great Depression and stuck over the ‘welcome to town’ sign is another sign, which reads, ‘no jobs here – turn back’.

Although only a scene from one of his favourite movies, it is beginning to feel all too familiar to Katoomba based Salvation Army Captain, Colin Young.

Captain Colin heads The Salvation Army Upper Blue Mountains NSW Corps (church), which runs a welfare service, including a breakfast program (six days per week). In the past 12 months, demand for the service has doubled.

The breakfast program, which serves up to 200 meals each week, is made possible by bequest funding to The Salvation Army.

Captain Colin says: “It concerns me that we are beginning to see echoes of that depression time, when large numbers of individuals took to the road to find jobs and shelter. We are seeing more and more of these ‘displaced people’ than ever.

“The hope of finding cheap rent seems to be drawing an increasing number of people into the Blue Mountains.”

He says, however, many arrive and then have trouble securing housing. Others have prospective jobs fall through, and it can become all too easy to slip into the spiral of homelessness.

Many locals, often socially isolated because of mental health struggles, are also turning up for the breakfasts. Sharing these morning meals allows Captain Colin, and the team of 16 dedicated volunteers, to better understand the needs in the community.

Captain Colin says: “We had one woman who used to come to breakfast daily until, one day, she just stopped and we were very concerned.

“So, we sent one of our welfare workers around to see her, and discovered her dog (who was her only companion) had died. The welfare worker found her alone in her house, which was in an abysmal state, with her dead dog. This poor woman was lost.

“Our worker also found out she had been suffering cancer for some time but had kept this secret. We were able to give her immediate help and support, get her to hospital and contact loved ones from interstate. Sadly, she has since passed away.

“Without coming to know others through the breakfast program, she almost certainly would have died alone, in her home, with absolutely no one to care. Instead, she died, loved and surrounded by friends...

“For some, the community breakfast is their only contact with others – and apart from the breakfast program, they are just isolated. These are people who are, in a way, lost as the world goes on around them. Our goal is to make this one place where they are truly cared for and valued as somebody special.”