Find out more
You are here: Home › About Us › News & Stories › Media Newsroom › Salvos Honour The Australian Public On Its 140th Anniversary

Salvos honour the Australian public on its 140th anniversary 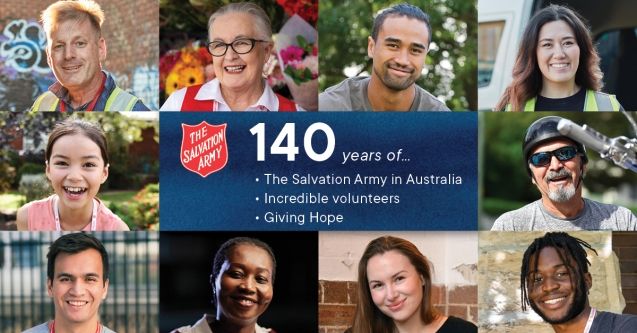 The Salvation Army is celebrating 140 years in Australia and is honouring the Australian public for its incredible support, generosity and volunteering over more than fourteen decades of serving Aussies in need.

On 5 September 1880, John Gore and Edward Saunders conducted the first unofficial meeting of the Salvos in Australia, speaking to a group of people in Adelaide’s Botanic Park.

At the end of the meeting, Gore famously said; “If there's a man here who hasn't had a square meal today, let him come home to tea with me” – foreshadowing the millions of acts of service from the Salvos to the Australian public in the years to come.

Now, 140 years on, the Salvos are reflecting on what has allowed them such a rich and fruitful history of serving the most marginalised and helpless in our society. Their answer – everyday Aussies.

“We want to thank every single Australian who has supported the Salvos over the years. Whether you have donated, volunteered or helped in any way, the Salvos wouldn’t be able to do what we do, without your ongoing championing of our work and cause,” said Major Bruce Harmer, The Salvation Army’s National Public Relations Secretary.

In a rough estimate from Salvos’ history, it was found that well over a staggering five million volunteers have supported the Salvos over the years – helping everyday Aussies in their time of need.

“One of the most amazing things about being Australian, is that we come together in times of need,” said Major Harmer. “Whether that’s supporting a friend in a crisis, volunteering during a natural disaster, or digging deep to help our fellow Aussies in need, we’ve got each other’s back. In whatever form you’ve supported the Salvos over the years, we thank you on behalf of the millions of Australians we are privileged to serve.”

Throughout the past 140 years, the Salvos have been on the frontline helping Aussies – whether providing food and support to frontline servicemen and women during wartime, offering emergency relief through countless disasters, or giving financial, emotional and spiritual assistance during a crisis, like the COVID-19 pandemic – we remain committed to serving the Australian public and being the people’s ‘Salvation Army’.

Major Harmer added; “Thank you to all the Aussies who have backed us over the years. Salvos will continue to live, love and fight to transform the lives of Australians, one life at a time with the love of Jesus.”