Find out more
You are here: Home › About Us › News & Stories › Media Newsroom › Millions In Relief Delivered As National Disaster Appeal Exceeds 40 Million 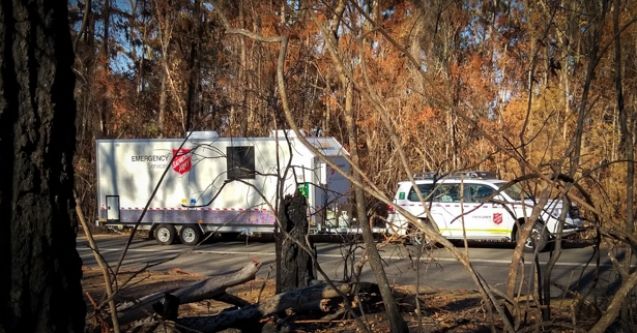 The Salvation Army's response to the national bushfire disaster is now in its fourth month with many emergency operations moving into recovery mode.

As part of the Australian Government Disaster Recovery payment, an additional $40 million will be allocated to provide direct assistance for emergency aid.

A joint media release from the offices of the Prime Minister and Minister for Families and Social Services has announced that:

“For communities directly affected by fire, emergency relief funding will be increased by $40 million. These extra funds can be used for food vouchers or used to pay for a broad range of basics including utility bills, clothing and petrol.

“The funding will be primarily administered by the Salvation Army Property Trust and the St Vincent De Paul Society who collectively provide services across all affected areas who will be working with locally based organisations to ensure access for communities in need.”

An additional $10 million will be allocated to financial counselling:

“$10 million for expanded financial counselling is a good outcome and will help the long-term recovery of people who are impacted by the fires,” said Salvation Army Lieutenant-Colonel Neil Venables.

“We advised the government during consultation that this type of support was an essential part of getting people and their communities back on their feet and we are pleased that our advice has been recognised.”

The bushfire crisis began in September 2019 in NSW and Queensland. By November 2019 it became apparent that we were experiencing a true national disaster.

At the time of writing, 29 people have lost their lives and an estimated 10 million hectares of bush, forest, grassland and farmland across Australia has burned. Over 2000 homes have also been destroyed.

The National Disaster Appeal was launched on November 9, 2019 in response to the growing crisis. Over $40 million has been received, with further significant pledges to be fulfilled.

“We want to advise the public that The Salvation Army has raised in excess of $40 million towards the appeal and we are overwhelmed by the generosity of Australians,” said Neil.

“A gift of $5 is just as important to us as a million-dollar gift and we make a commitment that we will be good stewards of those contributions to the relief effort throughout Australia."

The SAES is a national 24/7 state-of-readiness service with 18 full-time staff. Through this bushfire season, the team has been supported by a network of 3000 personnel, including trained volunteers, working four to eight-hour shifts on a 24-hour rotation. The infrastructure and management includes emergency catering trucks, community liaison vans, travel and accommodation.

SAES assists first responders and displaced persons with food, refreshments, personal care packs and support. Evacuees and others impacted by emergency and disaster are also provided with financial grants to help with personal, family and household living costs.

The Salvation Army's Community Engagement and Emergency Services teams are now working with federal, state and local partners in disaster response and recovery plans to map out the steps ahead.

“With our experience in previous disasters, we anticipate a three to four-year recovery process – we are here for the long term and it is our commitment to journey with people throughout Australia,” says Neil.“ Funds raised during this appeal will be used.

“We will respond to crisis needs as they happen anywhere in Australia, however, we are moving our focus – along with governments and fellow agencies – towards the recovery road ahead.”

From the mobilisation of firefighters and emergency personnel to the outpouring of support from people in Australia and around the globe, we are united in our sorrow as well as our resolve to stand together during this tragedy.

We sincerely thank everyone who has opened their hearts and reached out to help during this national crisis.

For more information on our work with natural disasters, including how to get help and how to donate, please visit our disasters and emergencies page.

All media inquiries should be directed to TSA Media Relations on 0437 830 550 or email mediarelations@salvationarmy.org.au