Find out more
You are here: Home › Christmas › Stories › The Gift Of Hope

The gift of hope 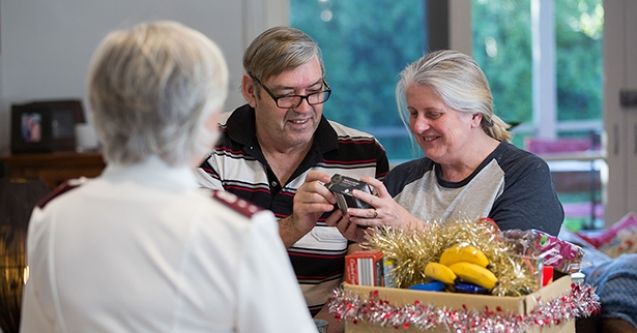 Jon* and his wife Beth* shed tears of joy as they drove away from the SalvosConnect centre in Mackay at Christmas last year.

The generosity they were shown by The Salvation Army and donors had almost overwhelmed them. They couldn’t believe they were given gifts, a Christmas hamper and a gift card.

“It was amazing,” Jon says. “Beth and I haven’t been able to give each other presents for a long time. We struggled to afford a gift for our son.”

In 2008, Beth was diagnosed with cancer. She had to quit her dream job in early childcare because her immune system struggled to cope with illnesses carried by the children. A simple infection once led to Beth being hospitalised with pneumonia.

Jon started taking a lot of time off work to care for their son and take Beth to medical appointments.

“I soon lost my job, and then the car and the house. Everything,” he says.

Beth responded to treatment and slowly became well enough to work again, taking on a cleaning job. Jon was also able to find another job.

The couple were beginning to rebuild their lives when Beth’s cancer reappeared. She was told she would have to undergo ongoing chemotherapy and surgery. History was repeating itself, as Jon again lost his job while taking time off to care for Beth and their son.

Jon used his small redundancy payout to cover outstanding bills, but this meant he was ineligible for Centrelink support for more than two months.

“I was in a dark place,” Jon says. “We’d lost our family home and were now renting. I’d lost my job again. Beth was away for treatment. I didn’t know what to do.

“Then I was chatting with a neighbour, who is a single dad. He told me to visit the Salvos.”

A glimmer of hope

SalvosConnect is part of Doorways, an innovative program that provides practical assistance to people in crisis. Through personalised case management, Doorways enhances a participant’s self-awareness, restores self-esteem and enables them to better understand their strengths.

“By that point, we had nothing,” he says. “Our landlord had phoned to say we owed three weeks’ rent. We had no food in the house. We had no money to run the car. We had nothing.

“I saw Jenny and explained my situation. Immediately she helped me buy groceries and fuel for the car.”

The impact of generosity

“The struggles do take their toll, but Jenny has done everything possible for our family,” Jon says. “She is a brilliant lady and her team are incredible. We always get a big hug when we come in.”

After their first visit, Jenny put Jon and Beth down for a hamper and vouchers at Christmas.

“People who donate to support The Salvation Army have good hearts,” he says. “They show they care. It reminds us we are not alone in what we’re going through.

“When donors give to The Salvation Army, they probably don’t realise the impact they’re making in the lives of people who are struggling. But they are giving a family hope. They are giving a mother and father the will to carry on. They are giving joy to kids who have endured really hard times.

“The support of donors really does give hope to everyday people.”