Find out more
You are here: Home › Christmas › Stories › Hope That Transforms

A hope that transforms 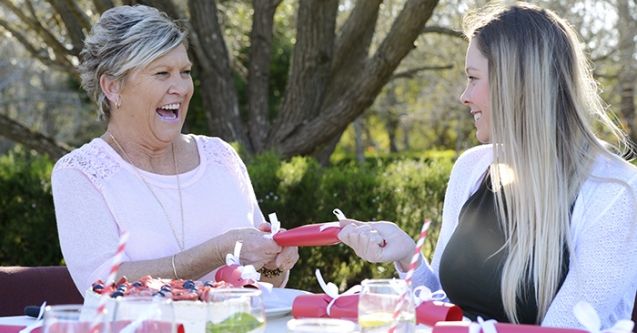 She survived breast cancer, but Sharon Thompson couldn’t avoid the perils of alcohol addiction. Lauren Martin spoke to Sharon about how The Salvation Army helped turn her life around.

As a wife, mother and grandmother, Sharon Thompson led a “pretty good life”. Good-natured, dedicated and hard-working, she often stayed back after her shift at the local club for a drink or two with friends. But when she got home, the drinking wouldn’t stop. Six, eight, maybe 10 more beers would be consumed. “I just didn’t want to be here anymore,” she admits. “I was just sick and tired of being sick and tired.”

There were plenty of mornings when Sharon woke up and promised herself that she would stop drinking, but two or three days was the longest she’d last. Having a drink was the “good-old-Aussie way”, she reasoned. It's how she coped with life – if she had a bad day, she’d have a drink after work to console herself; if she had a good day, she’d have a drink after work to celebrate. “My family wanted me to get help, but I just didn’t think I had a problem.”

But when she woke up on the lounge one morning and realised that she had tried to slit her wrists while drunk the night before, enough was enough. She could no longer bear the pain she was was putting her family through. “My husband had seen what I had been doing. And the look in my daughters’ eyes … it was time to do something.” Sharon had given birth to two daughters, survived breast cancer and had repaired her marriage after a separation, but recovering from her addiction to alcohol would be her toughest battle yet.

The Salvation Army calls it the Dooralong Transformation Centre, but in Sharon’s mind it was just another “rehab”, full of “drunks” and “junkies”. She remembers being extremely nervous, even scared, of what she may experience once she checked in. “I was in shock. I was emotional and I cried a lot. I was in disbelief. I remember just sitting there and looking around and thinking: ‘My life’s come to this.’”

The reality was, thankfully, much different. The Salvation Army is one of the largest providers of drug and alcohol treatment across Australia, with its award-winning Bridge Program celebrating its 50th anniversary last year. Set on 345 acres of land on the NSW Central Coast, the Dooralong Transformation Centre is a former holiday resort. It’s the largest residential treatment centre in Australia and, according to the manager, Salvation Army Envoy Craig Stephens, it is unique in the way that it approaches treatment. “The focus is helping people to journey to freedom from substance abuse or anything that can enslave,” he says.

Early in her recovery, while sitting alone in the Dooralong grounds, Sharon had a spiritual experience she will never forget; one that changed her life forever and gave her hope for the future. “I just had this overwhelming feeling of peace and contentment,” she says. “That I’m doing the right thing and that my life’s going to get better.” Sharon grew up attending church, but admits she never knew much about God, or his amazing love and peace. “It was just this beautiful feeling,” she says of that moment. “From then on I just got right into the program, did it all. The staff – they virtually just love you back to life again.”

Christmas 2013 was the first in Sharon’s adult life where she didn’t celebrate with a drink. It felt strange, but liberating. “It was weird but it was a great feeling.” Christmas at Dooralong Transformation Centre is a special time. Knowing that the day can bring about feelings of loneliness or sadness among some residents, the Dooralong staff put on a top-notch smorgasbord dinner. Family members are invited and, through the help of the K-Mart Wishing Tree Appeal, residents are able to give their children presents. Residents are also given a gift, for many the first gift they have received in a long time. “We just want to put the hope back into Christmas for these folk,” says Envoy Stephens.

Despite still being a residential client at Dooralong, Sharon was grateful to be allowed to spend Christmas at home, which was nearby. This time, the looks on her husband and children’s faces were different. Joy and love. Pride and relief. It was the best Christmas present she could ever have given. “Just seeing how proud the family were, it was nice just to enjoy the day without thinking about alcohol and getting sloshed,” she says. Envoy Stephens says Sharon passed her first test of recovery that Christmas Day.

Sharon graduated from Dooralong in 2014 a changed woman. Her biggest decision was to quit her job. She just couldn’t put herself at risk of relapse by working in alcohol service. Sharon now works at a chemist and delivers medication to elderly residents who aren’t mobile. She also attends various meetings throughout the week – Alcoholics Anonymous, chapel services at Dooralong, prayer groups and a weekly home church group where she encourages others in their transformation journeys.

At the age of 55, Sharon is experiencing the joy and excitement of a new life, a life that she thanks the Salvos for helping her to discover. “I’ve just got so much to live for now.” And for anyone who is struggling with addiction issues, Sharon has this message: “There is hope out there, you can get help, you really can – if you want it.”