You are here: Home › Red Shield Appeal › From Military Service To Homelessness

From military service to homelessness 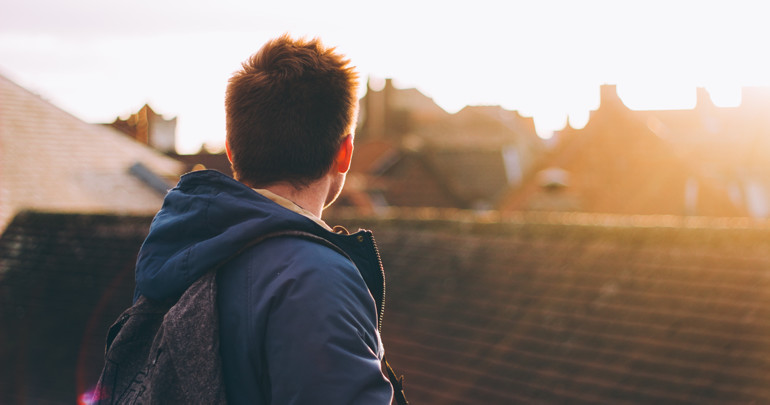 Sleeping behind a concrete wall that he says reeked of urine, Archie* was stunned when he found himself homeless.

As a child, he’d dreamed of a career in the military and worked hard to make it come true, entering the Australian Defence Force (ADF), after finishing school. When his military career was cut short after just 18 months of service, Archie struggled with feelings of depression, injustice and loss. Adding to his distress, Archie had no form of identification, income or qualifications that were recognised in the civilian workforce.

As he searched for work, Archie would alternate between sleeping on the street, staying in crisis accommodation and couch surfing.

“I was pretty angry and bitter,” he says, “it felt very unfair. I was homeless for about a year - picking out of bins, moving around, looking hard for work but doors kept closing.

“I was living real rough. There’s an apartment block with a concrete area outside near a generator and I’d just sleep in the corner of that. I just had my bag and the clothes on my back. I slept on the concrete. I didn’t have enough money for food. I wouldn’t eat. It would get really cold!

“I (also) tried to sleep in one of the parks. Every night you’d hear noises. There would be fear. People would threaten me.”

Understandably, loneliness and living rough took a physical and emotional toll on Archie.

“The way I look at it now,” he says. “These situations kind of test you, and moaning doesn’t really fix the situation. They make you stronger, but sometimes things did get to me. The strangest thing that happened was that I had my bike seat stolen.”

Archie had survived military training before but says in homelessness, sometimes it would be the small things that were the most challenging.

“The time I actually cried the most was when I’d get bitten by [swarms] of mosquitoes. They were everywhere. That was really soul-crushing. That, and waking up in the rain, or thinking it was about to rain.”

Breaking down barriers with veteran support

At the end of 2018, Archie was referred to The Salvation Army’s Veteran Support Program by RSL Queensland. He was given support addressing his housing needs and was initially provided with motel accommodation funded by RSL Queensland. He was then offered the ‘Veteran’s Flat’ at The Salvation Army’s Pindari [crisis] Accommodation Services in Spring Hill.

The Veteran’s Support Program (VSP) – a collaboration between The Salvation Army and RSL QLD –supports ex-military veterans and their families struggling with homelessness, or at risk of homelessness.

Jonathan Dyer, VSP senior case worker, explains that a veteran for the purposes of the program is anyone who has served one day or more in the ADF, with some support also offered to reservists.

Estimates of veterans experiencing homelessness in Australia are approximately 5800 but the figure could be much higher. Jonathan says the service in Queensland is essential and has seen a steady level of demand.

“There are also a whole range of skills that need to be learned or re-learned after serving in the forces, such as maintaining a tenancy, applying for work, having the skills obtained in service recognised in the civilian world, and many more,” Jonathan says.

The VSP helped Archie apply for identification and an income stream and assisted in developing tenancy skills for the future.

As he was struggling to find a place within the civilian world, the VSP team linked him to peer support groups such as Open Arms (previously VVCS), Mates4Mates and more.

Archie also decided he would like to study journalism or law at university, but was unsure how to achieve this, so his VSP case worker encouraged and supported Archie to look at TAFE courses as a first step. As a result, Archie recently enrolled in a Certificate IV in Crime and Justice Studies.

A year after being discharged from the ADF and experiencing homelessness, Archie had gained identification, income, secure housing, community support, enrolment in a TAFE course and found casual work.

Now settled in his new home, Archie is looking forward to starting a new chapter in his life. “The guys at [The Salvation Army] Pindari are absolutely fantastic. They treat the veterans really well,” he says.

“My (VSP) caseworker Jillian didn’t give up and kept working to get me a place. Eventually we found one, which was not easy. She helped me move in, helped with crockery and basic household stuff.

“Then they didn’t just palm me off when they were done. They’d check up on me and also said ‘call us any time’. They were fantastic. Without that help (getting life stable) would have been a lot harder.”

*This is a true story. Name changed to protect privacy.