You are here: Home › About Us › News & Stories › Stories › The Ultra Marathon Man Raising Money For Homeless Kids Imagine running 8 consecutive marathons at 17,700 feet above sea level, where you have 60% less oxygen in the air than at sea level.

Imagine running a marathon where temperatures fluctuated from -10 to +40 in one day.

Imagine running 333 kilometres in a race where you know, only 4 participants ever make it to the finish line.

Imagine doing it all without sleep for 3 days, because if you sleep, you might not wake up.

You’re imagining La Ultra, the world’s toughest ultra-marathon which is taking place in the Himalayas in August. And Jason Dunn, Head of Distribution for St.George Financial Planning at BT Financial Group, is Australia’s first resident, and only one of 10 people globally, to be invited to conquer La Ultra this year. If that’s not enough to inspire you, he’s set himself a target to fundraise $25,000 for the Salvation Army Youth Program as motivation to keep him going.

We spoke with Jason to find out more about why he’s driven to take on such an extreme physical and psychological challenge. 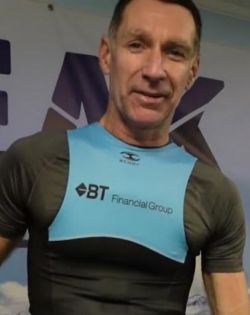 Your mantra – it’s never too late. Why is this so important for you?

At the age of 34 I was acutely aware that could have done more. My favourite saying over a beer was “I could have” and I began to hate those words. So, one day I made the decision to bury those words and never let them see the light of day again. I set myself a target of qualifying for and racing the Ironman World Championships in Hawaii, even though I smoked a packet of cigarettes a day and could not swim across the width of a pool. What I have learned over the last 16 years is that it is never too late to achieve things you believe are not possible.

What motivates you to keep going when you’re half way and struggling with the extreme conditions?

I know there will be literally hundreds of times when my body will tell my mind to quit, so it will be constant, never ending battle until I reach the finishing line. I have faced this many times before. Many things keep me going though and typically I will think about why I am there, the thousands of kilometres I have run in training, the endless sacrifice and pain endured just to be there, the people in my life that believe in me. When the tank is completely empty I will imagine how it feel if I quit, as opposed to the pride that will come from achieving something I once thought not possible. That will drive to the end.

What is the biggest fear you need to conquer in the lead up to La Ultra?

I guess with this race it is the unknown. It does scare me, though, but I guess that is the very reason I am attracted to this race. Extreme altitude, combined with such an unpredictable environment. This will include daily temperature swings of 50 degrees, rain, snow and likely avalanches. It is a lonely, remote environment the likes of which I have never experienced.

What is your training regime? How long do you have to acclimatise to the altitude?

To train as hard as I can, then hope. Since October my weekly program has been to clock up between 150 and 210 kilometres per week. Over the last couple of months that has increased. I run twice a day, covering 25 to 30 kms and 60 to 70 kms on each Sunday, sometimes up and down one long hill for the entire 60 kms. Over the last couple of months I will need to start running 250 kms, predominantly over hills.

My entire acclimatisation plan is to stay in the small town of Leh in the Himalayas for 2 weeks before the race and build a program that will include training at up to 21,000 ft. then hope like hell that it is enough.

Have you completed any other ultra-marathons?

Before I ran Ultras I completed 14 Ironman races, including the Hawaii Ironman World Triathlon Championships. After that I was curious to see how far I could run, so I began racing 100k road races. I won a few, collecting silver medals at the Australian 100k championships a couple of times in recent years, and was accepted into the oldest, most prestigious trail race in the world, the Western States 100 (miles). This race is run at altitude over the Sierra Nevada Mountains in California, with a Silver Buckle the prize; regarded as the most significant symbol of ultra-distance running in the world. That buckle cost me 7 toe nails!

Why the Salvation Army Youth Program?

I have selected The Salvos Education initiative because it empowers school students through education.  The initiative not only teaches young people about social issues like homelessness, it also equips them to respond in a practical manner. Nearly half of Australia's homeless population is under the age of 24 (44,037).  Salvos Education provides high school workshops, volunteering opportunities, mission trips, school and student support.

I am passionate about creating a shift in the perception of homelessness, and redefining what it means to seek help - a driving force behind Salvos Education. I'm very honoured to become a partner and friend of the Salvos and hope you will support me.

This race is going to be tough, but nothing compared to what young people in Australia face everyday. I'm racing La Ultra to end youth homelessness!

To support Jason and the Salvation Army Youth Program, you can donate here