Find out more
You are here: Home › About Us › News & Stories › Stories › Susie S Journey To Christ 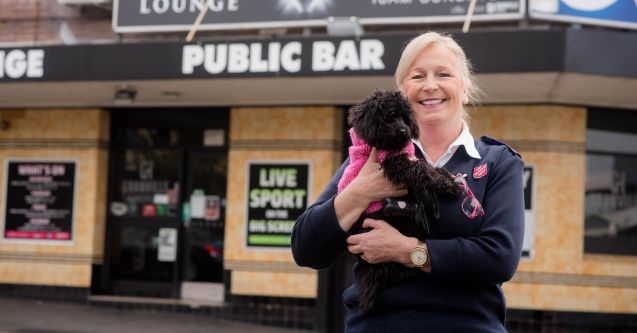 Susie Wallace and the pet poodle she takes on her rounds as a Salvation Army hotel chaplain in Sydney.

When Susie Wallace started drinking alcohol at the age of 18, she felt it gave her the confidence she lacked.

She would drink and party with friends on weekends, and it was fun. But when tragedy struck, Susie’s relationship with alcohol began to change.

“My gorgeous mum was my world. She was 63, attractive and healthy, and then she had a stroke,” says Susie.

The stroke was severe and her mother was left paralysed. Susie took six months off work, relocating from Sydney to care for her mother in Galashiels, Scotland, where Susie grew up.

“I would sit next to her bed at the hospital all day long and then at night, I’d go home and I would drink.”

She started taking anti-depressants. She became addicted to the medication and the alcohol.

After returning to Sydney, she continued to drink in the evenings. “I would get up every morning, put on my suit for my corporate job in the city and pretend like everything was okay.”

This went on for four years. Susie began to self-harm, on one occasion wounding her hand so badly it took three operations to repair the damage.

“I remember one night when I was recovering from one of the surgeries to my hand, I was feeling so low and some words my grandmother had said to me when I was a teenager came into my mind,” says Susie.

Her grandmother had told her: “Susie, you should get involved in The Salvation Army.”

Susie made a phone call. “I didn’t even know who I was calling, I just called the first number I could find for the Salvos,” she says.

The woman on the other end of the phone invited her to a course for people interested in becoming Salvation Army volunteers.

Susie enrolled and completed the course but continued to drink and take the pills, until one week in October 1997 that she will never forget.

“I reached a breaking point,” she says. “I could see that I was going to end up losing my unit, my job and everything. That’s when I stood at the gates of hell and I screamed out to Jesus for help.”

Susie, who attended Sunday school as a child, had always believed in Jesus but says he'd never been number one in her life. That was about to change.

She quit taking the pills and a few days later had her last drink of alcohol.

“The next day I made it to work, but on my way home I collapsed in the middle of the CBD,” she says.

Susie spent the next three months off work, suffering through extreme withdrawals. “I didn’t know what was happening," she says. "I know now that Jesus was with me every single minute.”

She admits that her job can be tough, but helping people is her passion.

“I am a firm believer that there is always hope for everybody,” she says. “The love of Jesus transformed my life and I am living proof of what he can do. Every life can be transformed.”