You are here: Home › About Us › News & Stories › Stories › Salvos Committed To Flood Affected Communities For The Long Haul

Salvos committed to flood-affected communities for the long haul 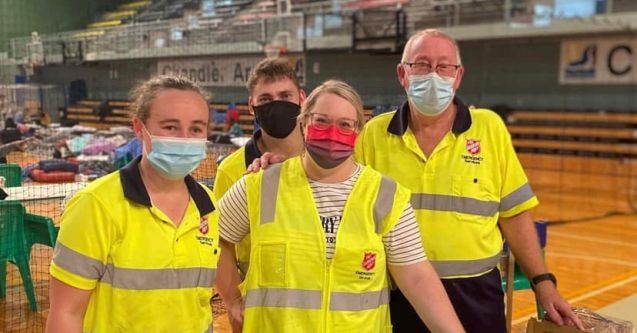 The Salvation Army active in emergency and committed for the long haul.

As the flood emergency continues to move down the east coast of Australia, thousands of people have been displaced from their homes and it is estimated that 18,000 properties will be severely impacted. To assist in the immediate response, The Salvation Army has released $1 million from Red Shield Appeal funds in support of affected communities.

Responding to the needs of people impacted by disaster is a long-term commitment and requires different approaches at different phases of recovery. The Salvation Army provides support to people throughout three major recovery phases – emergency relief, early recovery, medium to long-term recovery – and is currently in the first phase of our emergency response.

Activating at evacuation and recovery centres as the flood disaster unfolds, Salvation Army Emergency Services (SAES) and local Salvos are meeting the immediate needs of people who have been affected with meals and refreshments.

Our SAES teams are currently activated at 10 evacuation centres across Queensland and NSW, supporting first responders and evacuees with meals and refreshments (over 11,850), and emotional and practical support. Current evacuation sites where SAES teams are responding to the crisis include Gympie, Ipswich, Caboolture, Dalkabin, Chandler, Logan, Lismore, Tweed Heads and Grafton.

“Salvation Army personnel are on the ground right now providing thousands of meals for those impacted by floods across the east coast of Australia. In addition to providing meals, our teams on the ground are offering emotional support, which is well received by those displaced from their homes” says Major Bruce Harmer, National Public Relations Secretary for The Salvation Army.

The Salvation Army is launching an appeal for donations from the public to fund relief efforts in flood-affected areas. The Salvation Army Flood Appeal is aiming to raise $10 million, which will directly support the estimated 18,000 homes expected to be impacted during these unprecedented floods.

After the initial emergency response phase, The Salvation Army will remain in communities assisting with early recovery and into medium to long-term recovery to ensure the many local communities impacted by these floods are supported practically and emotionally through the recovery and rebuild phases of this disaster.

Early recovery will include assessing the individual needs of those affected and providing direct financial assistance. This will help people to cover expenses such as living costs in temporary accommodation and the extensive clean-up of their properties.

The medium to long-term recovery phase is where people will face the largest expenses. Many who have lost their homes will begin to rebuild permanent structures. This is also a stage where we find people reaching out to The Salvation Army for the first time after trying to battle through alone. Our commitment to support communities for the long haul means we are still there when those impacted need us the most.

“The Salvation Army is appealing to the public for donations to help ensure we can support those devastated by these floods get back on their feet” says Major Harmer.

Affected communities will be supported by The Salvation Army with teams of caseworkers who will be mobilised to the regions to work directly with individuals and families and provide grants, financial support and emotional care for the duration of the recovery journey.

“We have seen in the past two years, through bushfires, floods, drought and COVID-19, the spirit of generosity shown in times of hardship. We are calling again on Australians to help us be there for the incredible number of people displaced by the floods. Please, if you are able, give to The Salvation Army’s Flood Appeal”, says Major Harmer.

Update: With the recovery phase quickly taking over from emergency response in some areas, The Salvation Army will be active in four recovery hubs as of Thursday, 3 March. This includes: