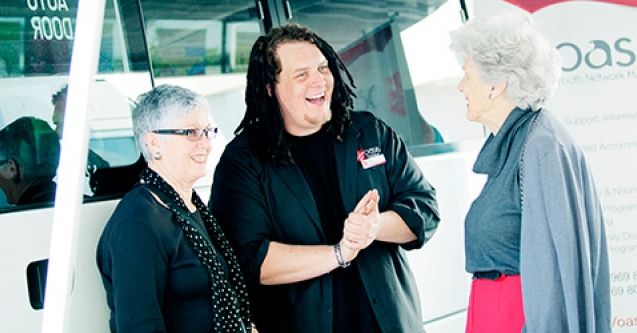 "A lot of the young people that we work with actually live with their grandparents. They’re in a later phase of their life where they should be able to kick back and enjoy things, but instead they are becoming a parent all over again." - James Cameron

One of the key programs offered at The Salvation Army’s Oasis Hunter Youth Network, is GPS - Grand Parents Support, for grandparents who are "parenting" their grandchildren.

The program includes workshops to introduce grandparents to the technology their grandchildren use, including the internet and social media.

Recently Oasis Hunter organised a camp at The Salvation Army’s Collaroy Centre to give grandparents and their grandchildren some time out.

The centre, in the Newcastle suburb of Hamilton, which is supported in part by bequest funding, also includes the Olive Branch training café, plus ‘The Bridge’ drug and alcohol rehabilitation service, crisis and medium-term housing, one-on-one counselling and case management.

"We are not just a RTO (Registered Training Organisation), not just a youth service –we’re a holistic approach to young people bettering themselves. We’re trying to skill-up young people to take on the world and be successful in whatever they choose."

"A lot of the young people we see have been told they’re not worth anything," says James. "We work to help them start believing that they can achieve.

"One girl we trained through the café had so many barriers - mental health, drug and alcohol, domestic violence, unstable living arrangements.

"I see her walking to work now and I think, ‘Wow, here’s someone who’s learnt to get by in the real world’ - what a massive change!"