Find out more
You are here: Home › About Us › News & Stories › Stories › Littlehales Have Salvo Chaplains To Thank

Littlehales' have Salvo chaplains to thank 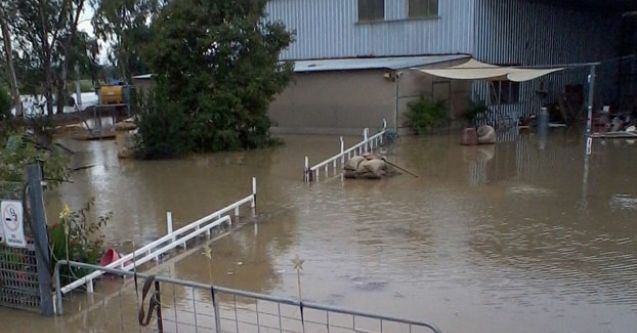 The Salvation Army’s rural chaplains continue to provide assistance for those affected by floods that devastated western New South Wales earlier this year.

When the Barwon River in Brewarrina, western New South Wales, flooded in February this year, no one could predict its impact, especially residents John and Helen Littlehales and their family.

The Littlehales property, consisting of their house and lucerne farm, is located outside the levee bank of the Barwon River. Up until two days before the river peaked when they were told to evacuate, they believed they were going to be safe, and their home would not be affected.

“The river just acted differently to what it normally acts. We were just pretty much caught unawares,” says Helen.

A frantic effort began, with SES crews assisting the family to try and flood-proof their home before it was too late. A make-shift levee wall was built around the home itself, however due to time restrictions it wasn’t as high as they would have hoped. Medical issues also put a strain on Helen, who had been battling a painful chipped elbow for 12 months.

Helen and two of her daughters evacuated to her work office in town, while John stayed on the property, sleeping in the Rural Fire Service truck. This served two purposes; to keep an eye on the rising waters, and to guard the property against theft and vandalism.

The waters continued rising, until their make-shift levee wall broke, and their house was inundated. To add to the damage, they believe that there was also sewerage in the flood waters. This water rose to one metre throughout the entire corrugated iron shed, which the Littlehales had converted into their home. Even now Helen can’t spend more than ten minutes inside the uninhabitable building – the stench is just too great.

North NSW Salvation Army Rural Chaplains, Envoys Lloyd and Vicki Graham, were no strangers to the Littlehale family, having met around four years ago. John and Helen even assisted The Salvation Army to deliver Christmas Hampers to struggling farmers in 2008.

“Normally it is Helen who makes phone calls, trips and gives assistance to help people get what they need following fires, floods and other disasters,” says Vicki. This time it is her family who needs the assistance.

Just two days after the Littlehales were allowed back to their property to assess the damage, Vicki and Lloyd arrived to be with them and provide physical and emotional assistance as they started to sort through the destruction. There was only one section of their home that wasn’t touched by flood waters – their daughter’s loft bedroom.

“The rest of the house; we just went through the cupboards and what was above the waterline and didn’t get wet we kept, and the rest of it got chucked in a big hole in the ground,” remembers Helen.

The Littlehales have kept a remarkably positive attitude throughout this entire disaster. Helen even described it as a relief when the floodwaters finally broke the levee, ultimately destroying their home: “It was almost a relief. Now that might not make sense, but we had fought this thing and fought this thing and all of a sudden, it had beat us. The fight was over. And it was a relief. You could actually breathe.”

And in that stoic attitude that is often attributed to those on the land, Helen has been able to joke with Vicki about the one electrical item they were able to salvage from their home - a bread maker, which Helen doesn’t even know how to use! “Helen said that the flood was a good way to make her have a long overdue clean out, albeit a bit extreme,” laughs Vicki.

A less welcome cleanout was the devastation of their farmland. They lost their entire lucerne crop, meaning it will be another two years before they will have any produce ready for production. They also lost up to 1200 bales of hay due to water damage.

The Littlehales weren’t insured and the location of their farm is not covered by a government declared natural disaster zone which means the family cannot get government disaster assistance.

The Salvation Army was able to offer the family financial assistance, providing them with immediate disaster assistance in the form of a gift card to buy essential items. Lloyd and Vicki have also helped the Littlehales stay afloat by providing bill assistance and donated household essentials such as blankets and sheets, household cleaning products, and personal hygiene items.

They are living a stressful, nomadic lifestyle in a motel, and are receiving assistance from the Department of Housing for this accommodation. However, with this being approved on a weekly basis, they do not know where they could be living from week to week.

The Littlehales have recently purchased two garages with money given to them by Helen’s grandmother. Whilst these have been delivered to their property, they now have to await council approval to convert them into a home. Their dream is to spend Christmas this year back on their property.

They are grateful for the assistance they have received from the Salvation Army. “It’s been a God send, I can tell you,” says Helen.