Find out more
You are here: Home › About Us › News & Stories › Stories › Having The Courage To Follow 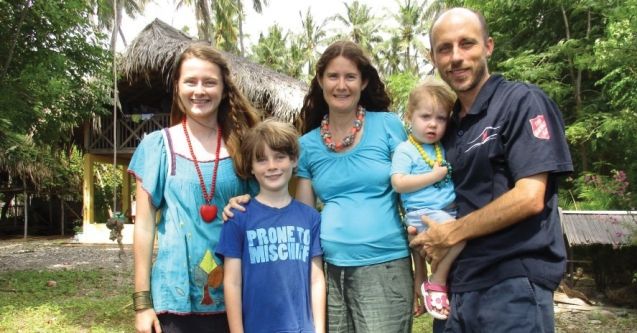 Caption: Samuel Bacon with his wife, Cynthia, and children (from left) Serenity, Israel and Xakira.

Grafton Salvationist Samuel Bacon and his family have invested more than 10 years of their lives into helping the people of Timor-Leste, a south-east Asian nation, rebuild after many years of civil unrest. In this article, Samuel gives an account of the work he is doing in the name of Jesus and The Salvation Army

When I came to Timor-Leste, I did not have any grandiose plan of what I was going to do. I didn’t really know where I was going and I didn’t know how I was going to get there. The more important objective was to trust in Jesus and live a life of obedience. I came to Timor-Leste with a simple desire to help the people. Timor-Leste is only an hour’s flight from Australia. Yet the country has been on an incredible journey of suffering which has included slavery, civil war, the horrors of World War Two, invasion by Indonesia and its subsequent withdrawal. All this has left a small nation, on our doorstep, ravaged with deep scars of mental and physical hardship at both individual and national level.

In 1999, almost all infrastructure, communications and power supply were destroyed. There was no government and no law. Over the next decade, the impact was felt in the next generation, with a 2013 UNICEF report listing Timor-Leste as having the highest percentage of children under five in the world who were moderately or severely stunted. Stunting is a condition that arises from poor nutrition in the first 1000 days of a child’s life.

So what is an Australian Christian supposed to do? Imagine that this place doesn’t exist? And so, in 2004, I just went there to see what I could do to help out. Most people in Australia seemed to think I was nuts. Wiser Christians advised me that it was not the right time. They reminded me that I had a wife and young daughter who should not be taken to live in a war-torn country rife with malaria and dengue fever. But I’ve never quite understood this line of thought. I thought Jesus called us to lose our lives in service to him. I thought Jesus died for me. Should I do less for him?

It turns out that God had been preparing me for this work for a long time. I had grown up on a farm in northern NSW where we had to manage our own water from tanks and springs. We milked goats, grew vegetables and kept chickens. We had our tough times and it was hard work. In Timor-Leste, the people have many of the same struggles, although it’s much tougher. There is less water and it has to be shared by many more people. The soils are far less fertile and they have only a few basic hand tools. Added to this, life in a tropical world is full of disease and sickness with difficult access to quality medical knowledge and medicines. This reality is then built on a spiritual world of rituals performed for ancestors and spirits of the land.

So I started out just helping the people I met. Usually this would be Christian organisations that needed some practical help. For example, building a toilet block for a school or fixing a septic system in a clinic. Sometimes I was asked by communities to help with water supply. I just did the same things for them that I did on our farm – a few rolls of polypipe, some fittings and a bit of hard work, and a village gets water. Then I found out that most people didn’t have a Bible but really wanted one, so I started distributing Bibles. As I got a better grasp of the language I began to realise that church leaders needed a better understanding of the Bible and how it fitted into their world, so I put more time into Bible teaching.

All along I was wondering why more Christians and, more specifically, Salvation Army soldiers were not involved in this vital work. Why was there not a Salvation Army presence already in Timor-Leste when the Army had been in Australia for more than 100 years? What was it about language, culture and geo-political challenges that prevented The Salvation Army from getting into the action? Is it about God’s timing or is it about a lack of courage and commitment on our part? These are questions that each of us must have the courage to explore.

I tell you this to encourage you to get into the action. Enter into the fight for the kingdom of God.  One thing I do know is that we must trust God and simply obey. Obedience will require perseverance and courage. Don’t be afraid. Unless one kernel of grain dies it remains a single seed (John 12:24). So go ahead, follow Jesus.

For more information, go to www.baconsbatimor.blogspot.com