You are here: Home › About Us › News & Stories › Stories › Bretts Story When The Light Of Hope Breaks Through

Brett's story: When the light of hope breaks through 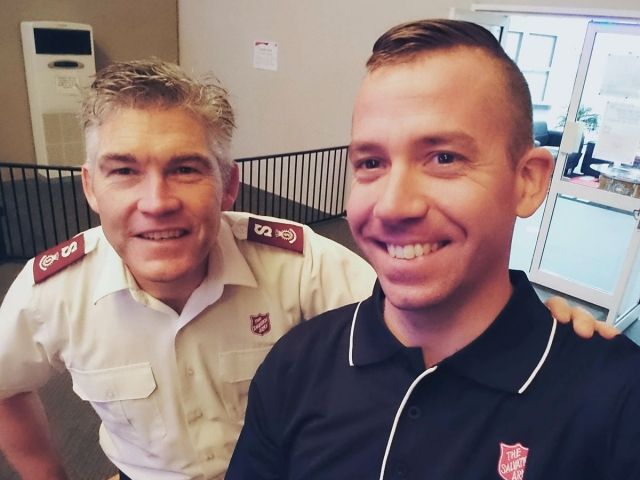 With a large and loving family, a great job and home, Brett should have been the happiest he had ever been. And yet it all felt meaningless, until he encountered God’s love. He shares his personal story of hope, this Easter.

One night in 2005, Brett was woken from a deep sleep by a mysterious voice saying, “Brett, get up”. He opened his eyes to see an orange glow around all the windows. Brett yelled, “Fire”, woke his wife, grabbed one of his sons and ran down the stairs.

He handed his son to his neighbours, who were running towards his house.

“I turned the tap on to try and hose the stairs down because they were starting to catch on fire. It was an old Queenslander-style house with steps to a high veranda,” Brett says.

“Then the hose exploded off the tap because of all the pressure, so I ran back upstairs, and my wife had our youngest son and she was just standing in the bedroom. All the windows had bars on them. Everything was on fire.”

Remembering television ads of the time that said in the event of fire, “Get down low and go, go, go”, the family struggled to the back door, only to find it fully ablaze.

“We started making our way back to the front door, and that’s when the smoke alarm finally went off,” Brett says. “So we got to the front door and the stairs were actually fairly well on fire by that stage. I had to push my wife off the stairs, and I jumped about two or three metres. Then we watched the house, our cars and all our contents burn.”

A community united in support

The young couple were renting and studying at the time of the fire. They were massively underinsured and highly traumatised.

Brett says friends, workmates and locals started to drop in gifts and meals. A local TV station did an appeal and a radio station paid for their wedding.

“We were incredibly grateful,” he says. “Everyone was very, very generous.

“The distinct thing I do remember was my wife was studying at university with a Salvation Army church member who sent us to a local Salvos centre. They talked to us and they gave us a computer and just really practical stuff and […] compassion and genuine care.

“The care was discreet and genuinely pastoral. So, it lodged in my head, that this was an organisation that genuinely cares for people, regardless of faith. And at that stage I had no faith. I was an atheist.”

Finding light in the darkness

By 2013, Brett and his wife had five kids. Brett had a good job and says he should have been content with his life, but instead he started to feel it was pointless.

“I didn’t really know how to be a good dad, or a husband, or anything like that, and kept thinking, ‘There’s got to be more to life than this’,” he says.

Brett says the mysterious voice that woke him years before and saved his family had never made sense to him. But as he started searching for meaning and praying, many more “small, strange things – miracles or coincidences” started to occur.

“God was sneaking into my life,” Brett says. “There were a couple of times when prayers were answered in astonishing ways, against all the odds. Then one night, I can’t really explain it – it was just weird – but I had a real encounter with God. It was like this invisible, but very real presence.”

Brett says the next day he woke up as a totally different person.

“The day before, I didn’t really care about kids starving in Africa. But the next day I genuinely did,” he says. “I started having real compassion and I started seeing sin in my life, even though I didn’t read the Bible or go to church. I know it sounds all a bit ridiculous and over the top, but it was also pretty cool.

“At the time my life was changing, and I encountered God, I felt more grounded and sane than I had ever felt, but had to keep checking – am I going insane [or] imagining things? But it was also so exciting.”

Brett studied at theological college and eventually took on a role as a Salvos youth minister in Brisbane.

“My heart now is to share joy, hope and a sense of purpose with others, and in so many ways it feels I’ve come full circle with the Salvos,” he says.

A close and ever-present love

“For me, the Easter message is that God is not distant and angry – but loving and close. Through Christ, God became one of us and suffered and experienced all the pain and trauma and sadness that we experience in life. Then through the cross, darkness, death and sin were ultimately defeated, and our lives can be transformed.

“In my experience, even in the hardest times, the light of Christ is there. And because of that, there is always, always hope.”