You are here: Home › About Us › News & Stories › Stories › Avas Life Transforms With Hope 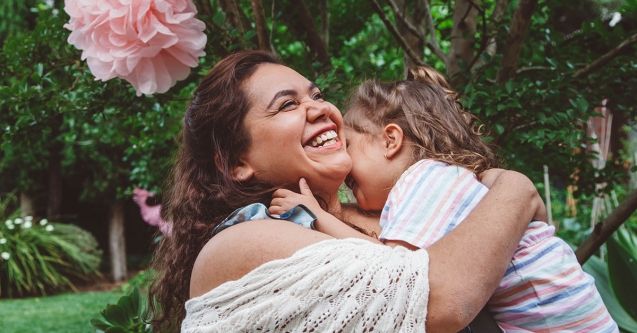 In one very dark year, Ava* lost everything that mattered to her, but then she found the path to hope. When Ava formed a relationship with God and connected with a caring Salvos church community, she says her life changed forever. This Easter, she shares her story of faith and hope.

Ava, whose name has been changed to protect her, but whose story is very real, says: “I will say this to the day I’m not on this Earth: The Salvation Army … has literally saved my life.”

In just a single year, she had lost everything. She had been struggling for years to make life work – to make ends meet, to maintain her relationship and care for her children. But when it all began spiralling out of control, she found herself in the same cycle of addiction and violence she had grown up with – one she had sworn she would never subject her own children to.

“I’m one from 11 – I grew up around alcoholics and domestic violence and all that – so as soon as we could leave home we did,” says Ava.

Repeating the cycle of addiction and violence

Moving out at just at 14, Ava got a job working in a restaurant. By 16, still a child herself – Ava became pregnant with her first child and was pressured into a marriage she was not emotionally prepared for.

“We bought a house and then I fell pregnant again soon after that. I was isolated from family … I pretty much just had to stay home and raise the kids. I never really was a drinker. Because [my husband] drank a lot, I was always the sober responsible one.”

The couple had three children together before Ava made the decision to leave. The divorce was hard and, from there, she says things quickly spiralled. Her new partner introduced her to ice (crystal methamphetamine), was very controlling and financially abusive. The pair had a child together and Ava developed post-natal depression.

Although she ended the toxic relationship, Ava’s mental health had suffered. The anxiety and depression she’d battled with her whole life gave way to addiction, until her brother encouraged her to go to a Salvation Army residential recovery centre.

“I think it took about three days and then I realised I really needed to be there,” she says. “I’d just hit rock bottom – I lost my car, I lost my kids, I didn’t have any money, I lost my job, I lost friends and family, I literally had a brother and sister and that was it – everybody cut me off.

“I always grew up saying that I’m not going to be like my mum – alcoholic and … around domestic violence – and in reality, I did exactly the same thing.”

Recovering with an open mind and heart

The process from the beginning took courage and perseverance.

“To get clean and sober they say that you need to change absolutely everything and that’s exactly what I’ve done. So, I went into rehab with an open mind,” says Ava.

As part of keeping an open mind, Ava began attending an optional Bible study at the recovery service.

“I downloaded the Bible app and … I just kept going to the Bible study once a week. On Tuesday night is kind of like a church service, there was music and people getting awards ... and it was just fun,” she says.

Ava went on to complete the ‘Alpha course’ (explaining Christianity) and had a powerful experience of God.

“[It] was like: ‘Ava you’ve tried your way for so long, it doesn’t work. Try something new. You’re safe, this is real.’

“So I did that. At the end of the Alpha course we could get baptised, and it was just out of this world like I just can’t explain it, it was amazing,” she says.

Ava says her Aboriginal heritage also connects her strongly and deeply to the natural world and to her ancestors.

“If I start feeling like my mental health is deteriorating, I need to go out and visit the bush or out to a rainforest, or a creek … I just need to go and sit on the earth, wherever it may be and kind of just like talk to the ancestors – like we talk to God – and just say ‘look I need some guidance’,” she says.

Find a path to hope and Celebrate Easter with your Salvos.
Search for local events here

When Ava left the recovery centre just two weeks before Christmas, she explains that she was welcomed into a caring community. “The [people in] The Salvation Army church, they made sure that I was safe. They knew that I was just coming out of rehab, so they gave me presents that I could give to the kids. They gave me food hampers and things like that, just so I didn’t have to feel stressed about anything.

“They really were part of the foundation to start my new journey,” she says.

Ava’s children came back into her care a week after Christmas, which gave her time to set up her home, put up a Christmas tree and create a safe space for them to reunite as a family.

Ava says she is encouraged by the turnaround she has made. To her, the story of Easter is also the story of hope and new life – a story that she relates to deeply.

“It gives me comfort knowing that there is a God, there is a higher power … I know deep down within my heart … that God walks with me every single day. I can feel it.”
If you need help this Easter, support is available here.

*This is a true story, with name changed for privacy
Words Holly Reed