RSDS representatives joined forces with Adelaide Congress Hall City Salvos and the ‘Do Unto Others’ Program to connect with the Adelaide community and provide a safe place if required in Rundle Mall during New Year’s Eve celebrations.

The RSDS Sallyman truck was set up as well as marquees and tables. Water, cordial, tea, coffee, biscuits, cakes, and lollypops were handed out throughout the evening.

Many connections were made and almost 2000 bottles of water distributed.   The Sallyman truck was a great focal point and became a meeting place for people during the night.

Ex and serving defence force personnel came and spoke to the volunteers about the support the Sallyman provides.  Young people were amazed when they realised that The Salvation Army was there to support them throughout the night.

About 12 volunteers gave their time to help out during the night – some staying to 5am. Some volunteers stayed at the refreshment area while the Street Ministry team walked the streets connecting with people and making sure people were ok.  It was a great night!! 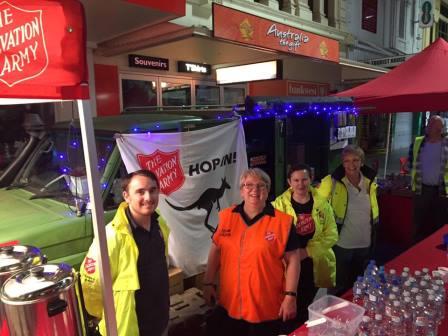