You are here: Home › Kokoda Trek 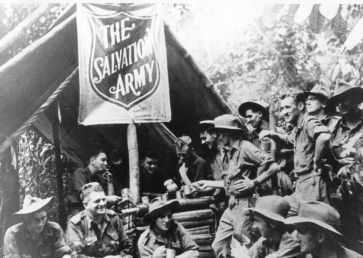 The Salvation Army Australia has since WW1 had a strong relationship of support with the Australian Imperial Forces and now the Australian Defence Force.  This has been a relationship wherein the Officers of The Salvation Army that had been appointed to support the Military  had a strong sense of commitment to the members of the AIF, ADF and have given of themselves in a way that demonstrated the love of God, not just in their personal Spiritual lives but also in their commitment to serve others in a physical & practical way.  This demonstration of God's love was the strength of the Ministry of RSDS in WW1 & WW11 and in fact became the legacy that was going to give RSDS life into the future. Chief Commissioner Major Barry Nancarrow had a heart desire that as many as possible of  the Sallymen (RSDS Reps). of today should be able to relive that Legacy and feel the heart of these great Sallymen that had gone before us. To that end  in March 2008 a proposal to walk the Kokoda Track was formulated and in September 2009 11 Sallymen with a support element stepped off on the Kokoda Track. Mounting a permanent memorial to all Sallymen at Goldie Creek and conducting other Memorial Services along the Track, recognising the work and worth of the RSDS service and the Legacy left by the Sallymen of the Track and all the Campaigns of war.

The end result was exactly what had been sought. As the 11 Sallymen retraced the steps and lived the experience of the Track  the heart and the legacy and the strength and the commitment  of  our forebears was very much alive in our hearts and lives again  in the heart of the 21st Century Red Shield Defence Services.