The Band is a group of dedicated musicians committed to spreading the Gospel message through the medium of sanctified music under the guidance of the Holy Spirit.

Specifically the aims of the Band are:

In 1981 bandsmen of retirement age were recruited from Salvation Army bands throughout Melbourne for a ‘one off’ occasion to accompany the singing and provide entertainment at a mid week senior citizens rally sponsored by The Salvation Army. The Bandmaster was Dick Collett. The band was received so well that the decision was made to continue on.

Over the past 36 years the band has entertained many thousands of appreciative people in senior citizen centres and villages, RSL Clubs, Community and Service Clubs, Community concert halls, as well as Salvation Army centres. The band is also featured at the BMW Edge Theatre at Federation Square during seniors’ week each year. Interstate tours have been made to both South Australia and Canberra.

Brian Davies took over the baton as Bandmaster at the beginning of 2014 from Bandmaster Noel Jones, who, on his retirement, received the ‘Order of the Founder’, the highest award that can be presented in The Salvation Army. Noel had led the Band for the previous 13 years.

Upon Brian’s retirement from the position of Bandmaster in January 2019, Graham Roper, a very capable and experienced musician, was appointed to this position. The Band Executive consists of 9 members. The Executive Officer is Major John Simmonds, and the Band Secretary is Major Graham Maxfield, both retired officers of The Salvation Army.

The band is self-supporting financially and doesn’t receive any money allocation from The Salvation Army, which it serves. The operation expenses of the band come from donations from concert engagements and the sale of CDs that the band has produced in recent years.

There are around 40 members in the band, ages ranging from 65 to 95. Amongst the players of the band we are fortunate to have an internationally known brass band and vocal composer and arranger - Major Howard Davies.

The band play and sing a wide variety of music. From the older traditional Christian to the more modern. Music from Movie Themes to Musicals to Classical. Music of a wide range such as – the march Colonel Bogey, All Through the Night, New York New York, The Impossible Dream, Those Magnificent Men, and Les Miserables.

The members of the band are from corps (churches) around Melbourne, who have either applied or been invited to join the band when a vacancy has occurred.

The bandsmen, who are all unpaid, feel very privileged to be able to present their unique style of Christian ministry, which brings joy and entertainment through their playing and singing.

If you require any further information, feel free to contact either: 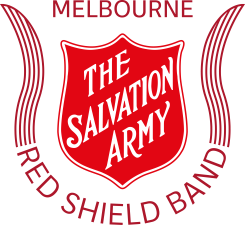