The historical roots of the Melbourne Staff Songsters go back much further than the inaugural Festival in 1987.

The desire to make music unto the Lord was so inbuilt in The Salvation Army that very early in its Australian history, groups known by such names as The Speaking, Singing and Praying Brigade and the Western Musical Company were formed. The function and effect of these groups is seen by such reports as: "they are a band of blood and fire soldiers wo are going around various Melbourne corps doing what they can in their humble way to bring rebels of sin to the foot of the cross"; and "never were such crowds seen here before, and certianly the Salvation Army work here has not recieved a greater impetus than now". 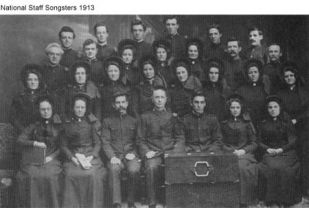 These early groups became popular and paved the way for the dispatch of the Federal Choralists for a tour of West and South Australia. Made up of seven ladies and five men, the brigade included five members who were from New Zealand.

The brigade continued in this form untill 1933. The years that followed saw a succession of "staff type" groups under various titles. In 1944 the final mention of a brigade was the Headquarters Songsters.

Then, in 1978 during the rehearsals for the musical "Glory" several cast members discussed the possibility of forming a special group of singers within the ranks of The Salvation Army. This led to the formation of The Masters Singers. This group continued until the early part of 1987.

On 11 April 1987, twenty-five songsters from around Melbourne, under the leadership of Owen Harris and Executive Officer, Lieut-Colonel Keith Earl, were inaugurated as The Melbourne Staff Songsters by Commissioner Donald Campbell.

The group has changed over the years, in leaders as well as singers. Rod Reeve took over the leadership of the MSS in 1989 after holding the deputy leadership role since April 1987. Rod retained this position for 14 years until his retirement in 2003. Brian Hogg was then appointed songster leader - a position he held from January 2004 until December 2014. Merryn Steel then took over as songster leader from January 2015 until December 2020.
The current Staff Songster Leader is Jeffrey Clarke, who was appointed to this leadership role in January 2021.

The Melbourne Staff Songsters perform at major Salvation Army events, as well as visiting many country, interstate and international centres - having toured to all States of Australia, New Zealand, the United Kingdom and Canada.

Personnel are drawn from Salvation Army centres around Melbourne, as well regional Victoria. Whilst their major role is performing as a choir, the group have included a number of individual quality soloists within the group.

As well as performing Salvation Army music, their repertoire includes sacred, classical and contemporary music from a variety of sources.

The MSS's presentation is traditional, contemporary and innovative, reflecting the wide variety of music styles now enjoyed by audiences of all ages.