Find out more
You are here: Home › About Us › News & Stories › Stories › Loves Triumph Over Tragedy 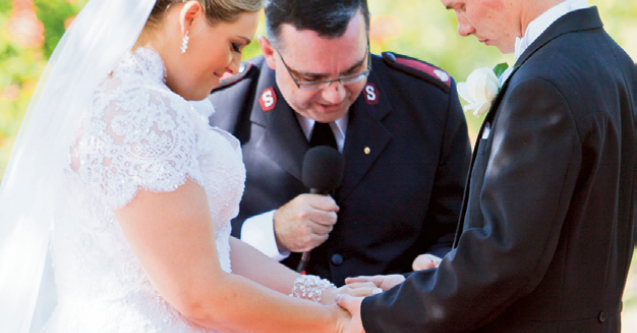 “Out of one of the most devastating events to ever impact this state … Out of that tragedy – love blossoms, a new relationship and future is born, and today that journey leads to this place and this joyous moment.” – Salvation Army Major Paul Moulds

John lost more than most in the 2011 Queensland floods.

When his home in Bundaberg was flooded in late December 2010, he retreated with his salvaged belongings to his parents’ home in the Lockyer Valley. Five days later floodwaters swept through and took not only the house, but his father’s life.

In the five weeks of uncertainty before John’s father’s body was recovered, John met Charlotte – an old neighbour who still lived in the area. Despite the tragedy, love triumphed.

“Charlotte was the most compassionate, caring and loving person I had ever met,” John remembers. Within a month he knew she was the person he wanted to spend his life with.

A few months after the floods, John and Charlotte were invited to attend a Salvation Army retreat in Sydney for people affected by the Queensland disasters.

“The camp was good,” remembers John. “It was good to be away from Queensland for a little while – a good break.”

There, they met The Salvation Army’s Major Paul Moulds, coordinator of the Queensland relief effort, and a friendship formed. They kept in contact and as John and Charlotte’s relationship grew stronger, Paul offered them support and encouragement.

“Paul’s been great. He’s always been there for us – he’s a bit like a second family,” says John.

On New Years Day 2012 Paul had the honour of marrying John and Charlotte in an emotional ceremony, saying: “You have walked together the road of suffering and heartache. You know you will be there for each other, because you already have been.

“Charlotte and John have chosen today, the first day of the new year, as a symbol of the power of redemption, of good coming out of bad. After a difficult and life changing 2011, they symbolically claim a new 2012, a year of happiness and new experiences, a new journey together.”