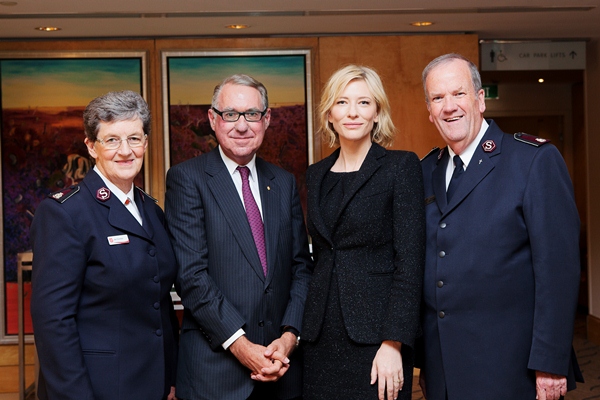 The Salvation Army today launched its annual Red Shield Appeal at The Westin Sydney with the help of Oscar-winning actress Cate Blanchett and leading businessman and ANZ Group Chairman, David Gonski AC. This year the appeal is aiming to raise $80 million nationally from the support of the Australian community and business sector.

The event, proudly sponsored by by Jones Lang LaSalle, was MC’d by former rugby union player Nick Farr-Jones who was also joined by the Director of Media Coca-Cola Amatil, Sally Loane. The luncheon was attended and supported by over 700 of Sydney’s most influential business leaders.

David Gonski, Chairman of the Gonski Education Review and Chancellor of the University of NSW, praised the Red Shield Appeal which has been conducted annually for the past 49 years.

“I have long admired the work of The Salvation Army in providing amazing help and support to Australians across the country and playing a pivotal role in many communities,” he said.

“I’m honoured to have been invited here to launch this year’s Red Shield Appeal with Cate Blanchett and encourage all Australians to get behind it and dig deep to ensure The Salvation Army can keep doing providing the much needed services they offer.

“All funds raised go directly to the Salvos significant social services projects, providing care for one million Australians who are doing it tough in their lives,” Mr Gonski said.

“Australia is going through a major economic transition and many families do face an uncertain future. Many people who have been well off in the past are now genuinely worried about getting through day by day.”

“The Salvation Army can pick up families who fall on hard times and help with issues from drug, alcohol and gambling rehabilitation to food assistance, skills development and job placement. It’s imperative that we maintain these services and the Red Shield Appeal Doorknock is integral to providing the funds to give us the opportunity to continue to help those who need it.”

To donate to the Red Shield Appeal please call 13 SALVOS (13 72 58), visit salvos.org.au, or in person at any Westpac Bank branch or by posting your cheque to PO Box 9888 in your capital city. To volunteer for this year's Red Shield Appeal Doorknock, please visit our doorknock registration page.