You are here: Home › About Us › News & Stories › Disasters Other Appeals › Salvo Volunteers Continuing To Cater Thousands Of Evacuees & Firefighters 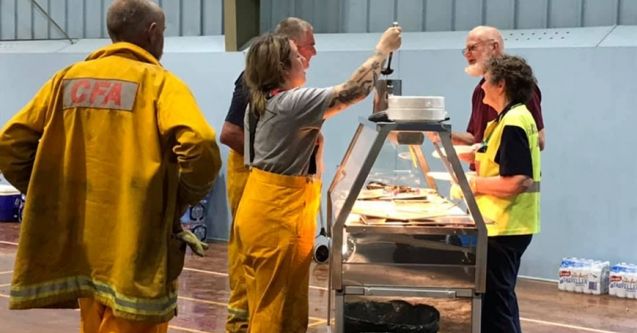 Salvation Army Emergency Services crews and an army of fresh Salvo volunteers are continuing to cater to thousands of evacuees and firefighters as the bushfire crisis escalates around the country.

Fires are now burning in many parts of Australia, with New South Wales, Victoria and South Australia the hardest-hit states.

Salvos have been responding to the call for more volunteers with SAES crews being bolstered by extra helping hands.

Major Topher Holland, General Manager for Strategic Emergency and Disaster Management, said The Salvation Army Emergency Services (SAES) was now in a "heightened period" but coping well with the massive increase in demand for emergency relief in some areas.

"Our teams are working extremely hard across New South Wales and Victoria, and in other parts of Australia," Topher said.

The Salvation Army has a presence at about 25 evacuation centres across NSW, with the busiest at Bega, Batemans Bay and Ulladulla on the South Coast.

NSW Premier Gladys Berejiklian has visited the SAES team at Batemans Bay to encourage them and assist in food preparation and serving meals.

The Salvation Army’s disaster-relief partnership with Woolworths is also continuing to work well.

"Woolworths has been exceedingly fantastic in our partnership and giving help," Topher said. "Their staff on the coast have been magnificent in supplying resources to people in local communities and finding ways of getting resources through."

In Bulga, inland from Newcastle, the SAES is working with the Rural Fire Service to feed firefighters battling bushfires in the area, while other evacuation centres have opened overnight across the Central Coast as several large fires continue to burn.

"We’re really thankful for the support of our volunteers, and their family and employers for releasing them," said Norm Archer, Strategic Emergency and Disaster Management Coordinator for NSW/ACT.

"Saturday will be a testing today (with high temperatures predicted) – we just need everyone to pray for a good outcome."

The SAES is also liaising with local authorities to assists tourists as they evacuate the South Coast, while police have provided one SAES crew with an escort to the evacuation centre in Moruya.

Many volunteers from Salvation Army corps and centres have arrived at evacuation centres to assist SAES crews as fires pose a major threat in Victoria and South Australia.

Volunteers from Sunbury Salvos in Victoria helped to set up the staging area for the nearby Eltham fires overnight. They provided 500 meals to firefighters, giving the SAES crews a welcome rest.

"I saw a few fire crews that did some really hard yards, and when they came in they felt really exhausted. They brightened up with a good meal," said Lieutenant Andrew Webb, Sunbury Corps Officer.

"The local community has been exceedingly generous. We took a lot of donations from them, and there was so much more than what we could use.

"We’ll hold them in stock if we’re needed again. Everyone wants to get behind the firefighters, and they really appreciate the fact The Salvation Army can be there and look after them."

After a challenging month, SAES volunteers have had a chance to rest as firefighters bring many fires under control.

"The volunteers in Queensland have enjoyed a welcome reprieve," said Adam Cole, Strategic Emergency and Disaster Management Coordinator for Queensland.

"Our thoughts and prayers are now with our southern counterparts."

The SAES is on high alert with the possibility of fresh bushfire outbreaks. Fires are burning in the state’s north-east and west of Hobart but there are no reports of evacuations.

One SAES team has been mobilised to serve over the past week, but this could increase with hot, dry weather set to continue over the weekend.

After a welcome break from fires over the Christmas break, SAES crews were back in action after fires broke out in Eucla and the Goldfields-Esperance region, with some roads being closed.

"We've been quiet over the Christmas-New Year period, which has been surprising given what's happening with rest of the country," said Ben Day, The Salvation Army Strategic Emergency and Disaster Management Coordinator for Western Australia.

Volunteers are assisting the clean-up effort following the Yanchep fires and received a boost in morale today after Ian Goodenough MP visited SAES headquarters as they prepare for the days ahead.

The state has remained dry but clear of fires over the New Year period. However, SAES crews are getting ready to respond to forecast heavy rain with the possibility of flooding in the west of the state in the coming days.

"We’re still waiting because when the rains come it’ll kick up something. But right now we are just holding our breath," said Captain Erica Jones, Strategic Emergency and Disaster Management Coordinator for the NT.