The Barracks is situated under Mount Stuart, on the southwest edge of Townsville; it was originally formed in 1914, and reformed in 1967 for Vietnam. Named after Lieut General Sir John Lavarack, an Australian Artillery officer, who served in both WWI, WWII. From 1946 till his death in 1957, Sir John Lavarack served as the first Qld Born Governor  of Queensland

It is the home to 3 infantry battalions 1, 2 & 3 RAR, as well as home to Engineers, Artillery, Cavalry, Signal and CSS Battalions. With almost 7,000 troops it is the largest Brigade in the Australian Army.

It is in a constant state of readiness as the first responding Brigade whenever the Govt sends troops overseas.

Also located in Townsville is 5th Aviation with Blackhawks and Chinooks Helicopters,

It is also home to 11 Brigade, headquarters for all Qld Reserve units.

If you would like to donate funds to Red Shield Defence Services, Townsville, please direct deposit to the following account:

Please leave your name as a reference. If you require a receipt, please email garry.johnson@salvationarmy.org.au

Nigel graduated from The Salvation Army School for Officer training in December 2000. From there he and his wife Penni ministered to a congregation in Far North Queensland for 2 years and then moved to another church in suburban Brisbane for a further 3 years before joining the Red Shield Defence Service in 2005.

Nigel has spent his RSDS time with 6RAR in Brisbane and has deployed to Timor Leste for the period September 2005 to February 2006, as well as time at RMC Duntroon before being appointed to 2RAR, Brigade Headquarters and 4REG in January 2014.

He enjoys being with the soldiers and camping wherever they are. He endeavours to provide support to all he comes in contact with in a practical and caring manner.  The morale of his soldiers is always high when he turns up on the scene.

Along with her husband Nigel, Penni became an Officer of the Salvation Army in Dec 2000. She shared leadership of the Corps in Far North Queensland and suburban Brisbane.

She joined her husband in being transferred to RSDS in Jan 2005, and has made a ministry of supporting partners and spouses of the soldiers. Penni has managed this by having a presence on the Barracks, getting to know the soldiers and taking opportunities as they arise to get to know the families.

Penni is a wonderful mother to three beautiful boys, who keep her busy.

2010 saw Penni heavily involved with Operation Homefront, working in liaison with Unit Welfare Officer and Defence Community Organisation. She has had opportunity to support spouses through the provision of meals, visitation, phone calls, on-line support and attendance at Welfare days.

Penni is also the Acting Musical Director for the Ausralian Military Wives Choir (AMWC) in Townsville. The choir welcomes women who have a significant relationship with an Australian Defence Force member or foreign Defence Force member. This includes partners, daughters, mothers, sisters etc... As a no expense, no audition choir, women with all levels of musical knowledge and ability are welcomed into the choir. The choir provides a safe and supportive environment for singing. If you are interested in joining the choir, please contact Penni.

The Representatives in Townsville are involved with both Corps in Townsville, being part of a variety of ministries including Manly Music, Oasis Youth Services, Recovery Centre and Emergency Services. 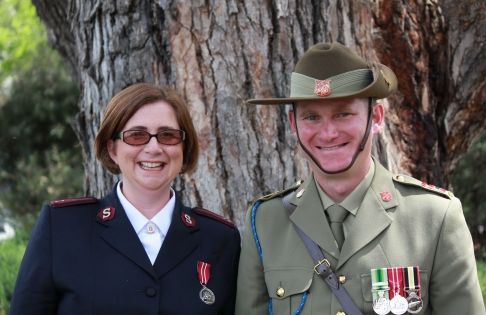