Gallipoli Barracks, Enoggera has a long history, having been in existence officially since 1908, although the wider area has been used for military purposes since 1855. Upon its establishment, the camp consisted of four paddocks that were used for training and drill. These being Bell, Fraser's, Rifle and Thompson's paddocks, with a number of rifle ranges being established there for use by civilian groups and units of the militia. Since then the base facilities have grown as the Army's presence there has grown through its involvement in the two World Wars and beyond. The base is currently the base is home to the majority of 7th Brigade units.

Gallipoli Barracks boasts a "Hop In" situated alongside the AFFCANS Canteen. The "Hop In" offers a full size pool table, table tennis table, a Wii and large plasma Television, along with a library and coffee and tea making facilities.

The photos below show soldiers enjoying the facilities at the "Hop In". The photo below shows soldiers enjoying the facilites of one of the "Mobile Hop Ins"  from Brisbane in the field envioronment. These specially equipped 4 wheel drives allow the "Sallymen and Women" to take their support into the field. If you would like to donate funds to Red Shield Defence Services, Enoggera, please direct deposit to the following account:

Please leave your name as a reference. If you require a receipt, please email lauriee.arthur@salvationarmy.org.au

Lauriee joined the RSDS team in January 2011 and is totally at home in her ministry in all aspects. From holding babies, to supporting families, to serving the ADF on base or out in the field on training exercises. Night or day, rain, hail or shine, Lauriee loves the challenge that RSDS brings her. Lauriee is an experienced RSDS representative committed to her role as a Sallyma’am.

Lauriee is currently responsible for 6 RAR and has also been responsible 7CSSB and 3CSSB. 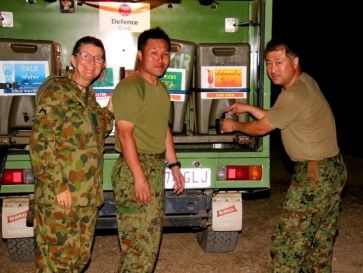 Representative Mark Messenger served in the military as a Musician for 23 years before joining the RSDS team at the begining of 2011.

Mark is currently responsible for 7 CSSB.

Mark believes that this is where God has called him to be and it is a real privilege to be able to serve and to share his faith in this way”. He enjoys talking and listening to soldiers, especially when they are away from home and family in the field environment. Mark can be contacted on his Mobile on 0419 244 086 or by email mark.messenger@salvationarmy.org.au Robert is responsible for 2/14 Battalion.