The Sydney Morning Herald on 20 March 1884 reported on the "commodious barracks for the Newtown contingent of The Salvation Army". The article gave a detailed account of the building and its opening meeting. It reported that "Mr. N. Melville, M.L.A., on taking the chair, was warmly applauded. He referred to the early days of the Army in Newtown. The few have multiplied and had become a thousand. The Army had accomplished what other organisations had failed to do; they had taken the Scriptures to the fallen, and had been the means of raising them up."

Commenting on the impact of The Salvation Army on the Newtown area Mr Melville went on to say: "Looking around that platform, he could see some of those who had been rescued, and were now fit to associate with. He cared not by what means the good was done; if the Army and its leaders realised that a certain course was their duty, it would receive his adhesion. To the credit of the Newtown Borough Council be it said that The Salvation Army and its band had been allowed to parade in its streets without hindrance."

The arrival in Newtown of pioneer Salvationist Edward Saunders as officer-in-command, who along with John Gore had commenced The Salvation Army in Australia, enabled the Army to construct its first purpose built Salvation Army Barracks on the eastern seaboard, in Brown Street Newtown.

Born in Orleton, Shropshire, England, in 1850 Edward Saunders had become a fully qualified stonemason and was converted in a Christian Mission meeting. After assisting John Gore in commencing The Salvation Army, Saunders became an officer and was responsible for many of the early Salvation Army buildings including Newtown, Junee and Wagga Wagga, as well as the 1900 Officers' Training Garrison in Melbourne, the facade of which still stands today in Victoria Parade, East Melbourne.

Drawing on his building background, Saunders set about constructing the much-needed hall in Newtown, which was officially declared open on 15 March 1884 by the pioneer of The Salvation Army in Sydney, Major Thomas Sutherland. The Sydney Morning Herald on 20 March 1884 reported that the Major "said that building was dedicated in the name of the Father, Son and Holy Ghost, and of General William Booth, of the Salvation Army, for the salvation of souls and the glory of God. Every brick that had been laid, and every nail that had been driven were consecrated to God's services. The work accomplished by the army was that which none of the sects had even attempted."

By the time The Salvation Army arrived in Sydney in 1883 Newtown had become an over-populated working class suburb and the clean air had been polluted by the brickworks in neighbouring St Peters. Many of the grand homes had been replaced by rows of terrace homes and the suburb had deteriorated into a slum area. It was the type of area in which the Army thrived and on 1 April 1883 one of Sydney's first corps was established among its blue-collar residents. Like most Salvation Army corps of the time the corps received a nickname and became known as the Newtown Nuggets.

In June 1922 a substantially rebuilt building was opened by the Territorial Commander, Commissioner Hugh Whatmore. Boasting a gallery, wide aisles and a large platform, the building was capable of holding 700 and was filled to capacity three times during the opening weekend.

In early 1924 the new building sustained significant damage when the adjoining premises, the four storey emporium of Marcus Clark and Co. were totally destroyed by fire. The Sydney Morning Herald of 15 January 1924 reported that: "It was one of the most disastrous fires in the history of Sydney. Firemen heroically fought it from every available point, but they were impotent before the demonic fury of the flames."

The Herald went on to report the damage to the Newtown citadel. "Next to Marcus Clark's, and separated from it only by a four-foot right-of-way, is the Brown-street Salvation Army's citadel, consisting of three halls - primary, senior, and junior halls. The main hall alone cost something like £3000 to build. All are badly damaged. With the collapse of Marcus Clark's wall the roof of the citadel gave way."

The hero of the day was Commandant Mathers who was conducting a Monday evening meeting when the fire broke out. Quickly moving his congregation of around 60 people from the building after a quick prayer and benediction, he dispatched one of the women to notify the fire brigade. Some 60 young people involved in youth activities in the YP hall were also quickly moved out.

Once all were safe the Commandant returned to the building with a group of soldiers to rescue the piano, organ and most of the band instruments. Although a small fire did break out under the platform this was quickly extinguished by the firemen. The main damage to the complex resulted from falling masonry from the emporium next door.

Although the Newtown Corps flourished for many years with strong sections, during the latter half of the 20th century the demographics of Newtown changed and corps numbers declined significantly resulting in the corps being closed.

The building was eventually sold and today houses the Newtown Branch of the City of Sydney Library. Its typical Salvation Army facade is still visible in Brown Street Newtown and the structure remains basically unchanged from the days when it was the home of one of Sydney’s first corps.

02 The rebuilt Newtown Citadel now the home of the South Sydney Branch of the City of Sydney Library -
Photograph courtesy of John Smith. 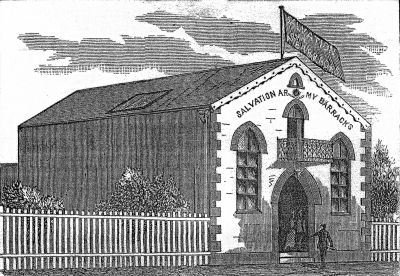 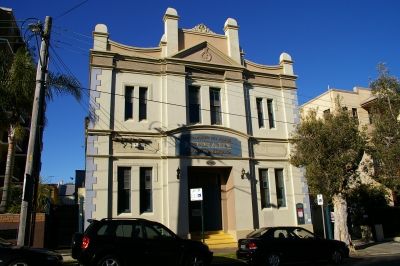 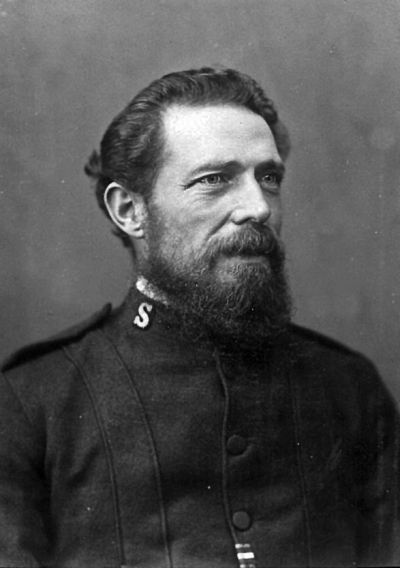 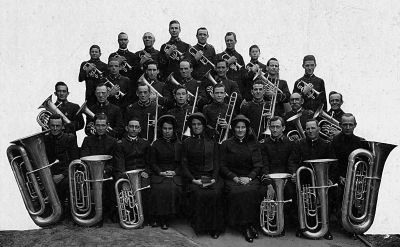 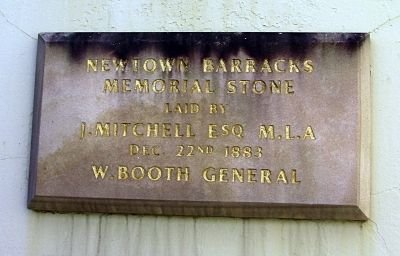 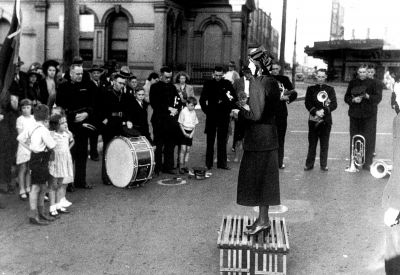