You are here: Home › Get Involved › Anti Poverty Week › Hope & Support For Communities Shattered By Disaster

Hope and support for communities shattered by disaster 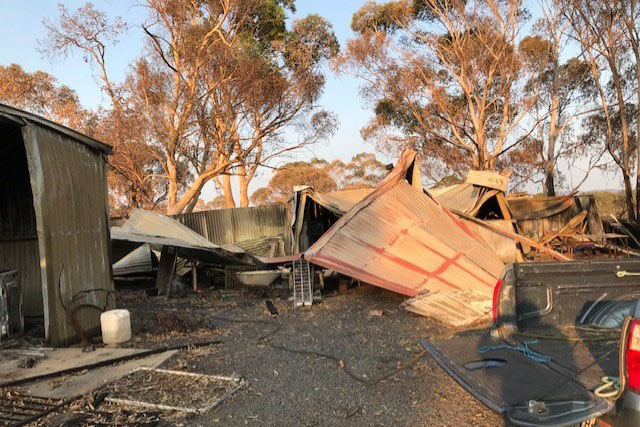 After fires tore through the Adelaide Hills, just before Christmas 2019, The Salvation Army's Moneycare was there to provide advice and assistance. Ten months after the fires, Karyn is still supporting the fire-affected community.

Financial counsellor Karyn Hicks says some people who had presented for support were weeping, while others sat in shocked, stunned silence. The majority had never asked for any sort of ‘charity’ or support before.

Based in the Lobenthal (SA) fire recovery centre – together with representatives from other agencies and government services – she is helping people to access bushfire grants and offering financial planning and other support.

Karyn says that – as expected in the long recovery process after any disaster – she is still seeing new people who are only just realising they need help.

“People are still presenting that haven’t presented yet, or they presented once in the early days and have since tried to manage on their own,” she says.

“One of the biggest things we’ve seen is a need for fencing, because most of the properties affected are rural. Their insurance often doesn’t cover fencing.  The other big issue is loss of pasture for stockfeed. Others lost stock as well, or the ability to run their rural businesses in other ways.”

Karyn says she feels privileged to represent The Salvation Army as part of a wider recovery team.

“The recovery centre here is amazing,” she shares. “The staff are absolutely amazing. We’ve got mental health services available, Rural Business Support to help people apply for business grants and a person from Primary Industries and Resources.

“We work really well together. We’ve all got that common thing of just helping, wanting to help people when they need it, practically and also with a listening ear.  There have been many tears – many, many tears,” Karen says. “We’re here to give people whatever they need at the time and everyone’s just so appreciative.” 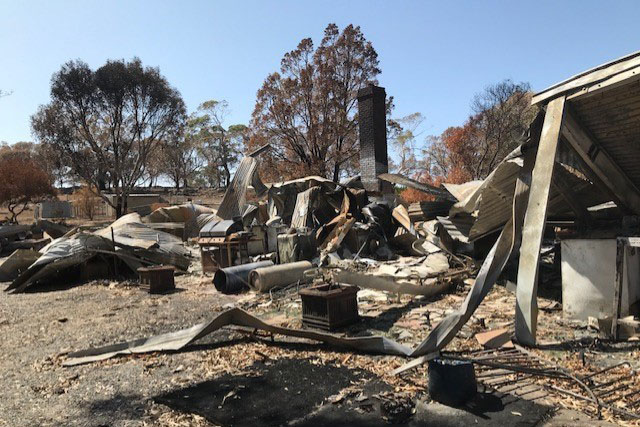 As a community volunteer, Heather has always helped others – she had never asked for help before. That is until she lost her home to fire in the Adelaide Hills on the afternoon of 20 December.

The devastating fire burned through around 25,000 hectares of land; destroyed more than 70 homes and damaged hundreds more. At least 4000 farm animals were killed, as well as untold numbers of native wildlife. Tragically, the fire also claimed the life of Heather’s neighbour.

Heather says that all indications on the morning of 20 December, were that the fire was burning away from her area, so a local friend evacuated to her place, hoping to find safety – then a wind change unexpectedly turned the direction of the fire.

“I thought it was just the glow from the distance, but then I heard the roar of the fire,” Heather recalls. “So, I ran from my gate to my front door, which was probably a hundred metres, and said to my friend ‘in the car’. We just threw the dogs in the car and we drove up the driveway with the fire around us.

“It was that quick,” she says. “Had I not been at the gate looking down into the valley, we probably wouldn’t have made it out – it was ferocious.” Heather is an accredited Bowen therapist (for humans and animals) and also keeps Belgian Draught horses – which she and friends take to agricultural and other shows to demonstrate some of the ways horses were traditionally used in agriculture.

Remarkably, her horses survived the fire but, Heather explains, “I lost everything else – all fencing, sheds, house and all the contents.”

Immediately after the fire, Heather was surrounded by care and the generosity of strangers, friends and family.  With Salvation Army bushfire funds, she was able to replace fence posts, re-seed pasture and organise other essentials not covered by insurance.

She says: “I really do thank donors. The help means you’re not stressed out from worrying about how you’re going to cope the next day. It just took so much stress off that whole process.”

As a Justice of the Peace, Heather helped many others after the fires with paperwork, but having just lost her own home, says she became overwhelmed.

“The fact that (Moneycare financial counsellor) Karyn and others were there to help with paperwork as well, meant so much,” Heather says.

“It got to the stage where if you gave me another form to fill in, I just probably wouldn’t have coped. So, to have somebody like the recovery team, my case manager and Karyn doing the things she did to help me get some of the grants through, lifted so much pressure.”

Humbled by the support of many, including Salvos donors, Heather says that coincidentally, The Salvation Army also played a role in helping her family well over 100 years ago.

“My grandmother was born in the late 1800s, one of 13, living in a corrugated iron shed with a dirt floor,” she explains. “At seven-years old she got typhoid. The ‘Salvo lassies’, as Mum would have said, were the only ones that came in and supported my great-grandmother and grandmother.

“It was very contagious, so the ‘lassies’ really were taking their own lives in their hands by coming into the house. So afterwards, although my great-grandmother and my grandmother had very little money, whenever anything was available, they always gave to the Salvos, because of what the Salvos did,” she says.

“There is even a chance without that Salvos help, my grandmother might not have survived – and I wouldn’t be here today.”