You are here: Home › Resources › Who Is Jesus 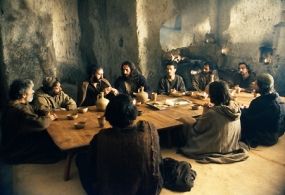 The actual historical existence of Jesus of Nazareth is rarely questioned nowadays. Most knowledgeable historians agree that Jesus was executed by Roman soldiers in the year 30 A.D. It is believed that he was probably born around 4 B.C. (even though B.C. means ‘before Christ’).

Jesus spent his adult life spreading a message of love, hope, tolerance and forgiveness. He loved people, and especially enjoyed spending time with those who were ostracised from society, but was scathing in his attitude towards religious leaders of the day because they cared more for their positions than for the people in need around them. He performed many miraculous healings and exorcisms in the course of his travels through modern-day Palestine.

In Mere Christianity, C.S. Lewis wrote: "I am trying here to prevent anyone saying the really foolish thing that people often say about Him: 'I'm ready to accept Jesus as a great moral teacher, but I don't accept his claim to be God.' That is the one thing we must not say. A man who was merely a man and said the sort of things Jesus said would not be a great moral teacher. He would either be a lunatic - on a level with the man who says he is a poached egg - or else he would be the Devil of Hell. You must make your choice. Either this man was, and is, the Son of God: or else a madman or something worse."

The Salvation Army affirms Jesus Christ as the Son of God and seeks to represent His message of love, hope, tolerance and forgiveness for all people.

Most importantly, we believe Jesus invites all people to live in relationship with Himself.

If you would like to know more about Jesus then we recommend checking out rejesus.co.uk, who provide a sympathetic yet open-minded look at all elements of Jesus’ life and work.

If you would like to speak to a representative of The Salvation Army Bellarine Peninsula then please contact us.