Find out more
You are here: Home › Archive › Schools › News › From The Streets To The Stage The Interview Part 3

From the Streets to the Stage: The Interview [Part 3] 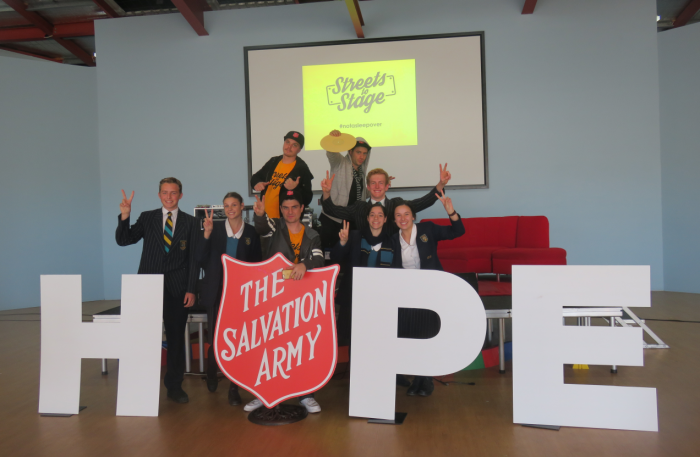 The 2016 tour has just concluded, you can read more about it here. The performance featured a Q & A with the two musicians Ozone and Supernal about their youth homelessness experience. This blog is the final part of a three part series* of the Q & A facilitated by guest MC Bee Orsini at William Clarke College on the 29th of July.

Interview continues from Part 1 and Part 2

..That’s quite amazing to see how that was a factor in such positive change for you. Supernal, you were part of this program with Musicians Making a Difference weren’t you?

Supernal: "Yes. I had to figure out a way to get rid of the car. I came up with a plan to leave it near the guy’s house and leave the keys in it so [it looked like] I got arrested. I spoke to a pastor at the local church and prayed, I was lucky enough to get into Oasis Youth Support Network because there was a list at the time in winter. They had the music program there and a lot of other services there as well for mental health and other underlying issues that needed addressing, that created homelessness in the first place. The music helped me release and instead of doing drugs I was able to do that and The Salvos helped with a lot of case management.

People believing in me was vital. The crazy thing that struck a chord with me is that you don’t really know you’re headed for homelessness until it’s too late. That’s scary. That’s why The Couch Project is something I’m so big on because if I had known how to get help earlier then I would’ve got it and that’s what we want to do with you guys. We want to equip you with the tools to be able to reach out and help people earlier. I was one of the lucky ones and there are other people who just didn’t get the help I did."

I’m starting to hear when you talk about the journey at this later stage of getting support, it’s not just the fact that you helped yourselves but there’s this language of wanting to help others. Could you tell me about that in relation to the music?

Supernal: "It’s identity. By learning to help with our music, other people related, then instead of us being so much in someone’s ear - people related. It helped them and we felt like we had something to offer in life and it liberated us. We realised, we have something to offer so we found a purpose and a drive and I think that life with a purpose is a reason to live so now we just want to pay the baton forward."

You’re up to some pretty exciting things these days – Ozone, what are you up to?

Ozone: "At the moment I’m studying heaps. I’m studying at Sydney Film School so I can be a director one day.  I’m also studying game design, working on a mixtape and an album that I’ll release next year and launching my own business which is for promotions and events. Everything’s going really well, I’ve got my own place, got my licence so it’s going great."

What about you Supernal?

Supernal: "Things for me have changed a lot. First and foremost; a shout out to my lovely wife Sri. We’ve been married for almost two years now and we have a place in Western Australia. I still do a lot of music, I like poetic marketing and also being an ambassador for social justice issues and I see myself as a bit of an activist for social justice."

You’re saying you’re a social activist for social issues, is that because of your past – you’ve made sense of things or what is it?

Supernal: "I think if everything that happened to me can be turned into something that can help somebody else then it didn’t happen in vain so everything I went through was worth it. Seriously, I was suicidal…but if telling people about this stuff shows them that they can [help and get help] – that’s a reason for me to keep going and I want everyone to know that there is hope."

What’s one final thing you’ve learnt or one final message you want to share with everyone today?